I looked over, discovering a large glass of milky liquid being passed to the owners. “What did you say? I heard something about a whiskey colada.” 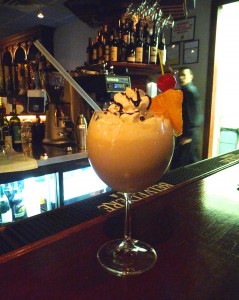 “That’s right,” the bartender replied, garnishing the glass with a cherry and a chunk of pineapple. “It’s surprisingly good,” she added, to her credit. At least she realized this cocktail was…unorthodox.

She proceeded to vigorously shake a can of whipping cream and coronate the colada with a healthy mound of the stuff. Still unsatisfied with her creation, she drizzled chocolate syrup all over the Reddi-wip tumulus.

Apparently thrilled with the whiskey-sundae colada, the owners insisted I take a photograph.

Far be it from me to judge a cocktail without sampling it first. It’s possible that this drink tasted perfectly pleasant, rich as it was in sugar and fat.

But I tend to prefer my summer cocktails a bit lighter. Before you rush out to buy some whiskey and Hershey’s syrup, consider trying one of my favorites instead:

Shake all ingredients in a cocktail shaker and strain into a martini glass.

Pour the gin and lime juice over ice in a highball glass and top with tonic. Add the Crème de Cassis and gently stir, or let it form a layer at the bottom.

Toss a sprig of mint over some ice cubes in a large tumbler. Add the vodka followed by the bottle of ginger ale. Mix gently and serve. If you are particularly fond of mint, muddle it with the ice cubes before pouring in the other ingredients.

Neither Welsh Nor Riesling: Part 1 A Serbian Surprise