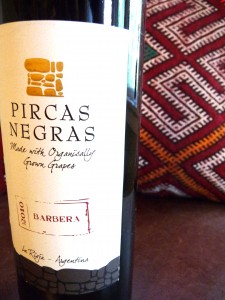 About seven hours by car north of Mendoza, La Rioja “..is the oldest of the wine-producing provinces and produces an attractive Torrontés,” according to Dominé. But Barbera in La Rioja, or for that matter anywhere in Argentina, warrants barely a footnote. Dominé tepidly ventures that “…Barbera and Sangiovese [have] the potential to make good-value, everyday reds.” 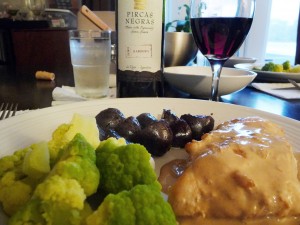 A recent Tuesday evening with a friend seemed perfect for a “good value, everyday red,” but Tuesday or not, my friend doesn’t tend to make everyday food. He prepared some beautiful roasted purple potatoes, steamed green cauliflower and “Chicken Breasts Diable” from Dorie Greenspan’s excellent cookbook Around My French Table. This last recipe features a luscious sauce of butter, shallots, mustard, Worcestershire sauce and cream, with a flavor not unlike Steak Diane.

Though not quite matching the tasty heights of my friend’s dinner, the 2010 Pircas Negras Barbera turned out to be charming and easy to drink, with cherries and strawberries on the nose that continued through to the palate. Light enough to work with the chicken, the wine tasted fruity and uncomplicated. With a slight chill, it was just the thing for a warm weekday evening; not life-changing, but fun.

2010 Pircas Negras Barbera: I wouldn’t go out of my way for this wine, but it’s a fun, fruity quaff that works just fine for a casual evening. Chill in the refrigerator 20 minutes before serving.