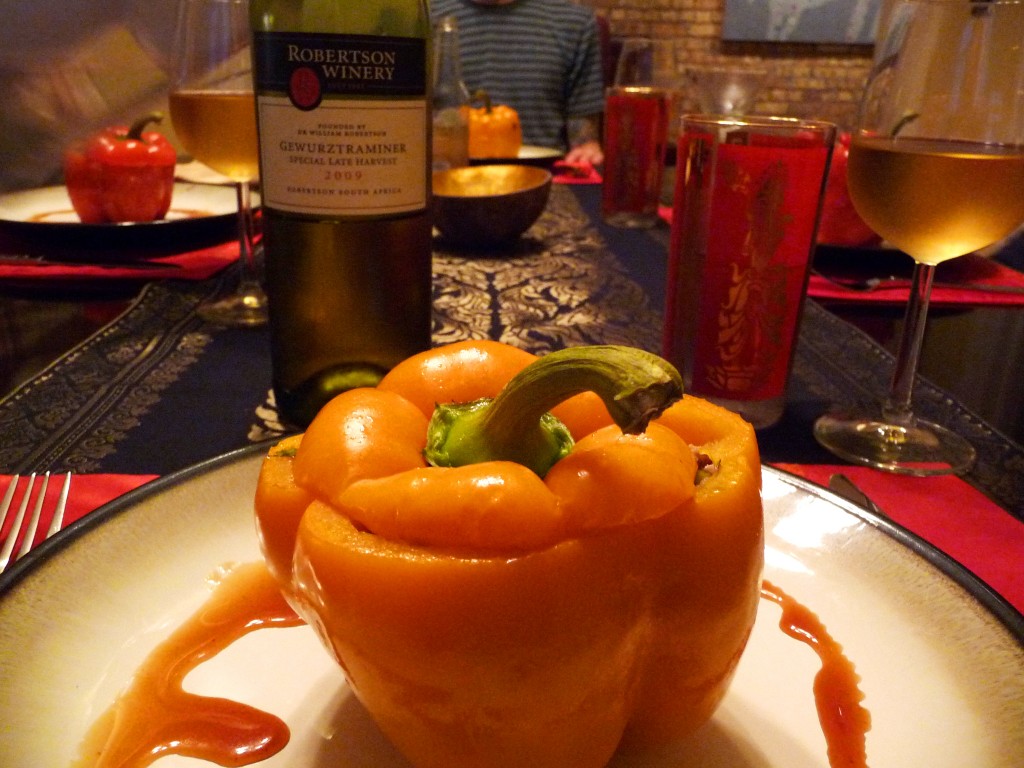 Before some friends came over to dinner the other night, they thoughtfully called to offer to bring a bottle of wine. I planned on making some Southeast Asian-inspired dishes, which always seem to cry out for Gewürztraminer. I have a soft spot for floral, aromatic whites, and a good Gewürztraminer can work wonders with fresh herb-heavy Lao, Cambodian and Thai recipes.

My friends obliged with a 2009 Robertson Winery “Special Late Harvest” Gewurztraminer (they spell it without the umlaut) from South Africa, far from the varietal’s most well-known home of the Alsace. I’d sampled German, Australian, French, American and even Spanish Gewürztraminers, but never one from South Africa. I was intrigued, but concerned that “Special Late Harvest” might just be a fancy way of saying “cloyingly sweet.”

We started with a round of Limoncello Cosmopolitans with the soup, a chicken and coconut broth steeped for hours with lime, lemongrass, galangal, fresh basil and star anise. These aromatics removed, I added in caramelized onions, ground turkey, oyster mu 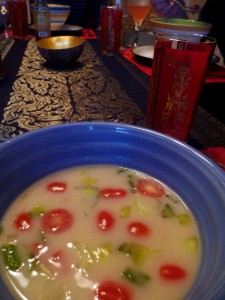 It wasn’t until the main course we opened the wine, a honey gold in the glass. Gewürztraminer grapes actually have pink skins, giving their wines a deeper golden color than, say, Sauvignon Blanc or Riesling. The bouquet smelled of honeysuckle and apple, but the traditional lychee aroma was not as pronounced as I expected. The wine felt a bit syrupy, with perhaps not enough balancing acids, but I enjoyed the flavors of honey, pear and peony.

I thought that was that, but this wine had a trick up its sleeve — a surprising finish of smoky tobacco. This taste of earthy complexity, a traditional characteristic of its more expensive Alsatian siblings, seemed beyond the wine’s modest $12 price tag. Paired with the red peppers stuffed with ground pork, garlic scapes, ginger, garlic and heaps of cilantro, surrounded by a soy-mirin reduction, the Robertson Gewürztraminer’s acids became more pronounced, and some white-pepper spiciness developed.

Gewürztraminer is a very minor varietal in South Africa; The Oxford Companion to Wine devotes but one sentence to it: “Limited plantings in South Africa have so far yielded sweetish wines but some of the right aromas.” Nevertheless, this “Special Late Harvest” Gewürztraminer showed some surprising complexity for its price point, and it’s worth having some on hand to pair with Thai or Chinese delivery.

Find It: This bottle was purchased at Kafka Wine for $12. Kafka Wine, incidentally, is an airy shop with a clever organizational system. They divide their wines into flavor categories such as earthy, fruity, spicy and toasty, rather than by region or varietal.

One Comments to “Honeysuckle and Tobacco”