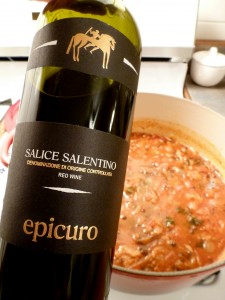 A clear, dark red in the glass, this blend of 80% Negroamaro and 20% Malvasia Nera smelled of berries and beef. (The wine’s native Puglia, I read in The Oxford Companion to Wine, features topsoil rich in iron oxide, which explains the meatiness.) Black pepper hit my taste buds first, followed by plums and then some hint of egginess. This sulfur-like aftertaste dissipated with subsequent sips, however, leaving just a pleasant, light-bodied red.

With a hearty bowl of Pappa al Pomodoro (Tuscan tomato and bread soup), the wine tasted significantly bigger, with a zesty spiciness at the back of the palate. It made for a delightful fall dinner.

I would ordinarily provide some further details about winemaking in Puglia, the heel of Italy’s boot, but my research yielded such a heap of contradictory information, I think I need a fresh blog post to even attempt to sort it out. Stay tuned.

2007 Epicuro Salice Salentino Riserva: A light-bodied, spicy red which tastes better with food. Drink now (aging won’t do it any favors), and chill about 20 minutes in the refrigerator before serving.

Find It: I purchased this bottle for about $7 at Trader Joe’s.

No Comments to “Out-Of-Control Controllata”