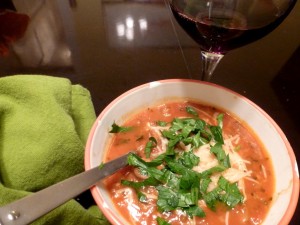 Because of my recent travels, I hadn’t cooked a thing in at least three weeks. My sanity demanded that I return to the kitchen. I knew I wanted to use up the last of some bread my husband baked and the luscious dates I brought back from Dubai, so I cooked up some Pappa al Pomodoro (Tuscan tomato-bread soup) and Moroccan tagine with lamb and dates.

Deciding on the recipes was easier than choosing a wine — I had trouble figuring out what red would pair well with both of these dishes. A Bordeaux might have worked, but it’s hardly odd, so I opted for a 2009 Big House Red. This wine blends no fewer than 12 different varieties, and I figured something in there would surely pair well with each recipe.

The cutesy back label makes the most of the name’s play on words, indulging in two paragraphs of pseudo-jailspeak (in an almost illegible font) which unfortunately tell us little about the wine inside:

Yadda, yadda, yadda, Warden! Break outta the confines of stuffy tradition with the Stelvin™, an unrepentently practical closure by a long stretch. Cagney or Robinson would never deem it a dirty screw.

Yo, the ’09 Holmes is a muscular but by no means inelegant, eclectic blend viz Petite Sirah, Syrah, Montepulciano, Barbera, Nero d’Avola, Tempranillo, Malbec, Aglianico, Souzao, Charbono, Petit Verdot and Cabernet Franc. It more than Sing-sings for its supper.

Egad. First, Stelvin™ or not, it most certainly is a screw cap. Second, and more important, I have no idea what this wine tastes like beyond “muscular.” The lengthy list of varieties doesn’t help clarify matters. The location is noted simply as “California,” so we can be fairly sure terroir plays little role in this wine. The website, at least, adds that 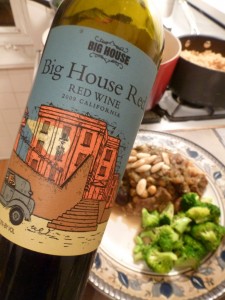 “Portions of the blend underwent malolactic fermentation and a barrel régime with mostly French and American neutral oak.” So… it may or may not be a little oaky.

Perhaps I’m asking too much from an $8 bottle of wine, but I would much rather have some useful information on the label than some prison/wine word jazz.

In any event, the wine tasted just fine. Actually quite surprisingly good, considering the cloying label and low price. A deep magenta, it had a distinctly jammy nose and voluptuous fruit flavors (most notably raspberries). The fruitiness morphed into spiciness before finishing with a rather medicinal, Robitussin-like flavor. It didn’t necessarily “Sing-Sing” with either the soup or the tagine, but it had just enough astringency to clear the palate in between bites.

I wouldn’t risk jail time to try this wine, but if you’re looking for something inexpensive, you could do far worse than posting $8 in bail to spring this bird from your local liquor store.

2009 Big House Red: As the website notes, a “Fruit Bomb.” It’s fun though, and if you don’t mind the slightly medicinal finish, a very good value. I bet it would pair quite well with pizza. Chill in the refrigerator about 30 minutes before serving.

Find It: I don’t remember how I came to own this wine, but I see Binny’s offers it for $8.

Is This Beaujolais? No, It’s Iowa. Rosé In The Desert (Part 2)