There’s a lot more to Chile, it turns out, than Maipo and Colchagua, two of Chile’s most famous wine valleys. I recently ended up with a bottle of 2008 Tabali Reserva Especial Syrah from the Limarí Valley, a region I’d never heard of and certainly couldn’t place on a map. I couldn’t place Maipo or Colchagua on a map either, for that matter, so I knew it was time to reach for my trusty World Atlas of Wine. 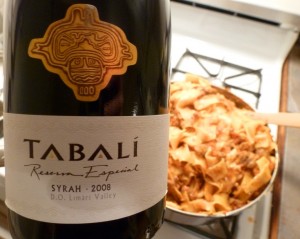 In such a long, thin country, I assumed that latitude determines the climate of a particular vineyard. Most growers held this opinion until quite recently, and indeed, the wine regions are organized from north to south. But according to the Atlas, the terroir varies “much more from west to east, according to a site’s geology and proximity to the cooling influences of the Pacific and the Andes.”

The cold Humboldt Current running up the coast and the snowy Andes Mountains allow high-quality vineyards at latitudes much closer to the tropics than in most other countries. The days get quite hot, but crisply cool evenings keep things under control. The Atlas notes that Chile’s wide day-night temperature variation “is almost certainly a factor in the clarity of the fruit flavors.”

Until oenologists realized the potential of Chile’s other regions, most vineyards were planted around Santiago in areas like the Maipo and Colchagua Valleys. Unfortunately, this is “the wrong place,” according to The Sotheby’s Wine Encyclopedia. It argues that the Secano region harbors the most potential in Chile, but even today this “forgotten” region remains relatively inaccessible and underutilized.

If you ever do see wine from Secano (or the adjacent Casablanca Valley), snap it up, but in the meantime, we have to work with what we’ve got, such as Limarí. This northerly region almost touches the edges of the Atacama Desert, one of the driest places on the planet, and therefore requires irrigation. Because of these rather extreme conditions, the valley wasn’t considered to be a serious wine region until the 1990’s. Before then, most grapes grown in the Limarí Valley ended up in Pisco, a type of brandy.

Almost anywhere else, it would surely be insane to grow Syrah about 300 miles from the Tropic of Capricorn, but since Tabali’s vineyards are just 18 miles from the Pacific, the varietal thrives. The grapes for the Reserva Especial are harvested by hand, according to the Tabali fact sheet, and aged for 12 months in oak barrels. Not bad for an $18 bottle of wine.

Tabali’s care pays off. A deep purple with magenta edges, this Syrah smelled like blackcurrant and rich jam. It’s flavor was also hearty and jammy, but medium tannins and some acids balanced the dark fruit. A rather woodsy, slightly smoky finish rounded out this full-bodied wine. It wasn’t necessarily subtle, especially with its 14.5% alcohol content, but it sure was tasty. Paired with some Pappardelle Bolognese, it became even bigger and spicier — it was almost too much. There was a lot of flavor packed in that $18 bottle.

This Syrah proved yet again that Chilean wines can be a great value, but it also illustrated how it can be worth spending just a bit more on a Chilean wine than you might be accustomed to. Sure, you can find something perfectly tasty for $7 or $8, but why not go for the $18 bottle every now and then, and drink something that really makes you stand up and take notice?

2008 Tabali Reserva Especial Syrah: Big, rich and jammy, but still firmly under control. It packs a lot of punch for the price tag. Chill in the refrigerator for about 30 minutes before serving.

Find It: I’m having trouble finding a U.S. merchant who sells the Reserva Especial (as opposed to the Reserva), perhaps because it won the “Best In Show” award at the January 2011 Wines of Chile Awards.