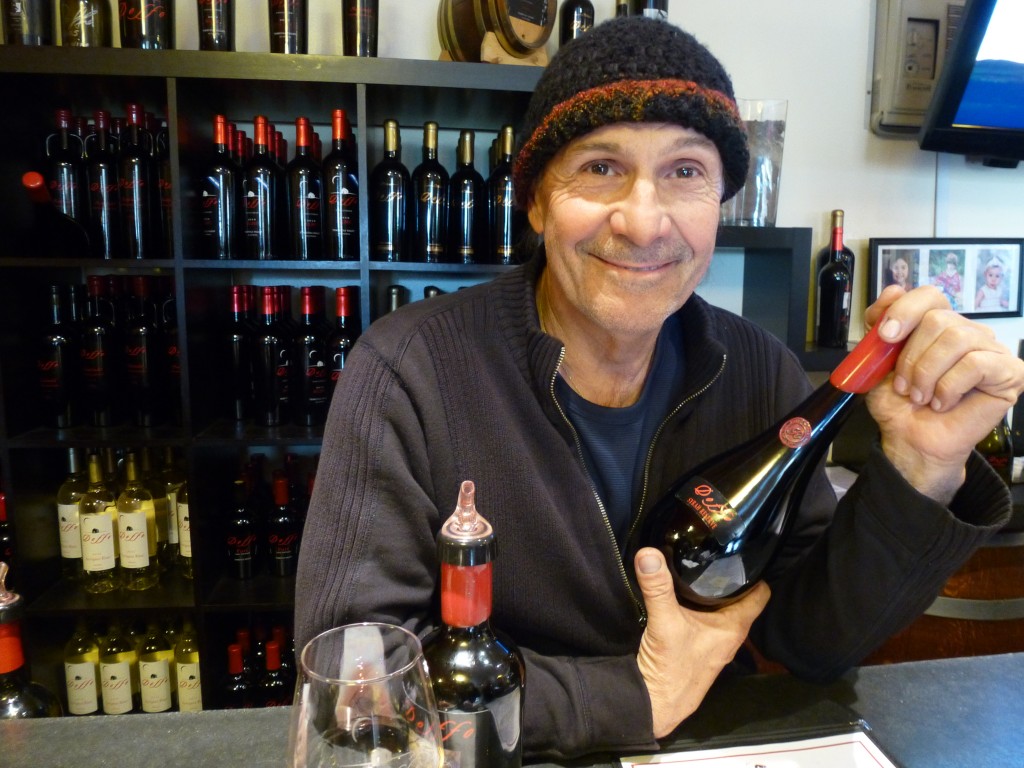 This is my last post about Temecula, I swear on a bottle of Château d’Yquem! But I wouldn’t do justice to this unfamous region without talking about my visit to Doffo Winery.

On the road out of town to Palm Springs, this winery was my last stop in Temecula, California, but certainly not the least. Argentinean Marcelo Doffo founded the winery in 1997, and his family still tends the 15 acres to this day. Indeed, the Doffo Winery has a very hands-on approach — I discovered the lively Mr. Doffo himself pouring wines in the tasting room, which was decorated with part of his motorcycle and scooter collection.

The tasting room was crowded on my Sunday visit, but not with bachelorette parties. A party did enter the room at one point, and Mr. Doffo did not look especially pleased, perhaps because he suspected they were more interested in getting buzzed than really tasting the wine. The bachelorettes must have taken the hint, because they were gone when I turned around a couple of minutes later.

Mr. Doffo is right to expect his patrons to pay at least a little attention to his wines, which are clearly crafted with heart and skill. I enjoyed all the wines I tasted immensely; they had deep fruit that felt immensely satisfying. Here’s a rundown of what I sampled:

2010 Malbec: This unfiltered wine had dark, dusky fruit and a supple mouthfeel, with some tannins and a touch of something herbal at the end.

2010 Grenache: I was surprised by the perfumy aroma of this wine, which tasted very fruity and spicy. It had some of that fun “Temecula raciness” described by winemaker Clark Smith. Mr. Doffo didn’t use his own fruit for this wine, however — his neighbor grew it. When the original buyer fell through, the neighbor offered Mr. Doffo a smokin’ deal, and he bought the grapes. Mr. Doffo noted that he used Syrah skins to “beef the wine up” a bit.

2010 Cabernet Sauvignon Reserve: Composed of 90% Cabernet, this wine is actually a field blend, with the remaining 10% coming from other grape varieties planted in the same vineyard. It had an enticingly jammy aroma, rich fruit and a finish of chocolate and tobacco. Lush and delicious.

2010 Zinfandel Reserve: Very dark in color, with an aroma of overripe plums. This was a big wine, but very smooth and focused as well. But just when you think you’re out of the woods, a pow of spice punches you right in the kisser.

2010 Zinfandel: Mr. Doffo called this wine “The happiest Zinfandel in Temecula,” and while I wouldn’t presume to compare, I will say that it certainly made me happy. It had an exotic, jammy nose and similarly jammy fruit on the palate. Yet there was good focus, and it never became overblown. It started lush and round before expanding into some powerful spiciness.

2008 Syrah Reserve: There again was that jammy aroma, this time mixed with some caramel. Rich fruit tightened into some food-friendly acids and a some tannins; it expanded in the mouth before restraining itself and focusing.

NV Port: A blend of older and younger vintages, this fortified wine had a deep red fruit aroma that sucked me right in. There was that telltale jammy fruit, and a powerful, almost overwhelming cinnamon spiciness. Dusky but very sprightly.

NV Late Harvest Syrah “Los Nietos”: I had great fun tasting with Mr. Doffo, but I’ll always remember this wine, named for his first grandchild who passed away shortly after birth. It smelled of very sweet raspberries, and it had impressively rich, plummy, chocolaty fruit. There was something green in the middle which gave way to a long, luscious finish. Surely excellent with chocolate.

And there you have it! If you go to Temecula, and I hope you do, you can’t go wrong with Doffo. And for that matter, you’ll surely be delighted with Palumbo and Wiens as well. Happy tasting!