Home » Grape Varieties » Carmenère, Chile » The Not Merlot Of Chile

The Not Merlot Of Chile

Historically, Chile has not been especially proficient at identifying its grape varieties. As described in this post, Chile’s Sauvignon Blanc wasn’t Sauvignon Blanc at all until the 1990s. And it wasn’t until 1994 that a French professor discovered that thousands of acres of what was thought to be Merlot was actually another grape entirely. Since Merlot was quite fashionable in the 1990s (and up until the release of the film Sideways), vineyard owners must have been initially dismayed to learn that they in fact had some odd, old Bordeaux variety that no one had ever heard of. But what a propitious discovery it turned out to be.

The vineyards contained not Merlot but Carmenère, which had “virtually died out” in Bordeaux, according to The Sotheby’s Wine Encyclopedia, by the time it was discovered in Chile. Though this variety is “rarely acknowledged in the vineyards of Bordeaux today,” notes The Oxford Companion to Wine, it was “widely cultivated in the Médoc in the early 18th century and, with Cabernet Franc, established the reputations of its best properties.” The reason the Bordelais eventually abandoned the variety, the Companion goes on, was because of its “susceptibility to coulure and resultant low yields.”

I think this is a fact that’s important to emphasize: The abandonment of Carmenère in Bordeaux had little or nothing to do with the quality of the wine it produced.

Even more exciting, the Carmenère “had been preserved in its pure, ungrafted format,” according to Sotheby’s, since the original vines had been imported from France in the 19th century before phylloxera required the grafting of vines onto American rootstocks. At its best, according to the Companion, when yields are limited, Carmenère “has the potential to make some very fine wines, combining some of the charm of Merlot with the structure of Cabernet Sauvignon.” 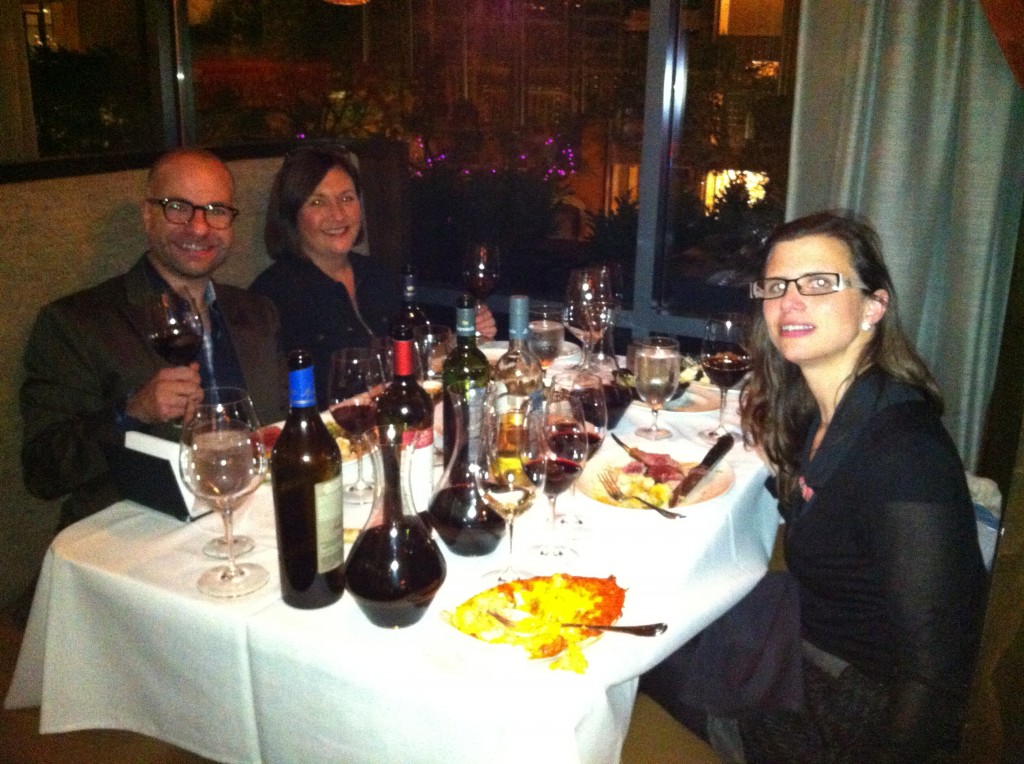 The author, Liz Barrett and Andrea León Iriarte at Del Frisco’s in Chicago

That sounds like a winning combination to me, and so it was with some anticipation that I sat down to dinner with Andrea León Iriarte, the winemaker of Casa Lapostolle (one of Chile’s most critically acclaimed wineries), and Liz Barrett, Vice President of Corporate Communications for Lapostolle’s U.S. distributor, Terlato Wines.

Founded by the same family that owns Grand Marnier, Lapostolle grows its fruit organically, and then takes things one step further by employing time-consuming biodynamic practices as well. These practices have tangible effects in the vineyards and in the wines, according to Iriarte, who noted that organic and biodynamic agriculture has made the differences between vintages more distinct.

Just as important, Lapostolle sited its vineyards to take advantage of the most favorable terroir, rather than the most fertile soil (where many of Chile’s vineyards were originally located). The World Atlas of Wine cites one of Lapostolle’s vineyard sites by name, in fact, noting that “the most quality-conscious producers are now actively seeking poorer soils, such as those of Apalta in Colchagua for their best wines.” As described on the Lapostolle website, the shape of the Colchagua Valley also naturally regulates exposure to the sun, which is particularly beneficial in warmer climates.

All that sounds promising, but would the Carmenère varietals and Carmenère-based blends we were trying taste like the ideal that the Companion described above? Or would the wines be what Sotheby’s argues that Carmenère too often becomes, “a one-dimensional parody of overripe blackcurrants”? Let us consult my tasting notes:

2011 Lapostolle “Casa Grand Selection” Carmenère: Though officially a varietal, this wine is technically a blend of 89% Carmenère, 6% Merlot and 5% Syrah, and most of my resources agree that Carmenère indeed benefits from the addition of some blending grapes. I found the aroma of wine-soaked wood enticing, and the flavor did not disappoint: big fruit, round but lively acids, some oak, and a fresh finish — a pleasant parsley-like lift at the end. Paired with some of Del Frisco’s superbly tender beef, the wine tightened up, and more notes of iron and earth came to the fore. An excellent value for about $14, and certainly not the blackcurrant bomb of Sotheby’s fear.

2011 Lapostolle “Canto de Apalta”: The “Song of Apalta” was thus named, according to Iriarte, because of the birds’ nests discovered in the vineyard (the winery itself also takes the form of an abstracted bird’s nest). The 2011 is only the second vintage of this blend of 45% Carmenère, 25% Merlot, 16% Cabernet Sauvignon and 14% Syrah. A less-expensive reinterpretation of the flagship Clos Apalta, this wine was originally created for a restaurant, but it proved to be so popular, the winery started making more of it and marketing it more generally. I can see why. It had a nose of dark and dusky fruit, and powerful flavors. After a blast of big, big fruit, a hit of white-pepper spice kicked in followed by some significant but well-balanced tannins. Paired with the beef, the tannins felt more rustic, giving the pairing a rather masculine feel. Another very fine value for about $20 a bottle.

2011 Lapostolle “Cuvée Alexandre” Carmenère: The fruit for this wine, a blend of 85% Carmenère and 15% Syrah, comes entirely from the top-quality Apalta vineyard. And as with all Lapostolle’s wines, the fruit was hand-harvested. The attention to detail makes a difference — this wine had a meaty, red-fruit aroma and notable focus on the palate, with restrained red fruit, green-peppercorn spice and some soft tannins undergirded by a meaty note. Again, it packs a lot of flavor considering its $15 price tag.

2009 Lapostolle “Clos Apalta”: On its website, Lapostolle calls this opaque purple wine a “world-class blend in the Bordeaux tradition,” and indeed, if you are interested in experiencing what the top Bordeaux wines of the 18th century might have tasted like, the Clos Apalta might be getting close. A blend of 78% Carmenère, 19% Cabernet Sauvignon and 3% Petit Verdot (another Bordeaux variety now rare in its original home), this wine is a worthy splurge, with fruit coming from vines ranging between 60 and 80 years old. I knew from the lusciously rich aroma that I would be in for a treat. Absolutely gorgeous fruit managed to seem at once jammy and focused — no mean feat. The perfectly balanced acids and tannins made the wine feel exceedingly elegant, and undertones of violets and thyme added to its complexity. The finish went on and on — just when I thought it would be over, yet another flavor would reveal itself. As Barrett aptly noted, the Clos Apalta “happily overstays its welcome.” It tasted fantastically rich with the lamb, which brought forth additional notes of dried herbs. It sounds expensive at $70, but if you put this wine side-by-side in a blind tasting with Bordeaux wines costing two or three times as much, my money is on the Clos Apalta.

It seems odd to think that Bordeaux’s reputation as a top wine region is due in no small part, historically speaking, to the former success of its Carmenère-based blends. It seems odd, that is, until you taste wines like Lapostolle’s.

2 Comments to “The Not Merlot Of Chile”

A Tasting At Dos Viejos A Formerly Unusual Sauvignon Blanc