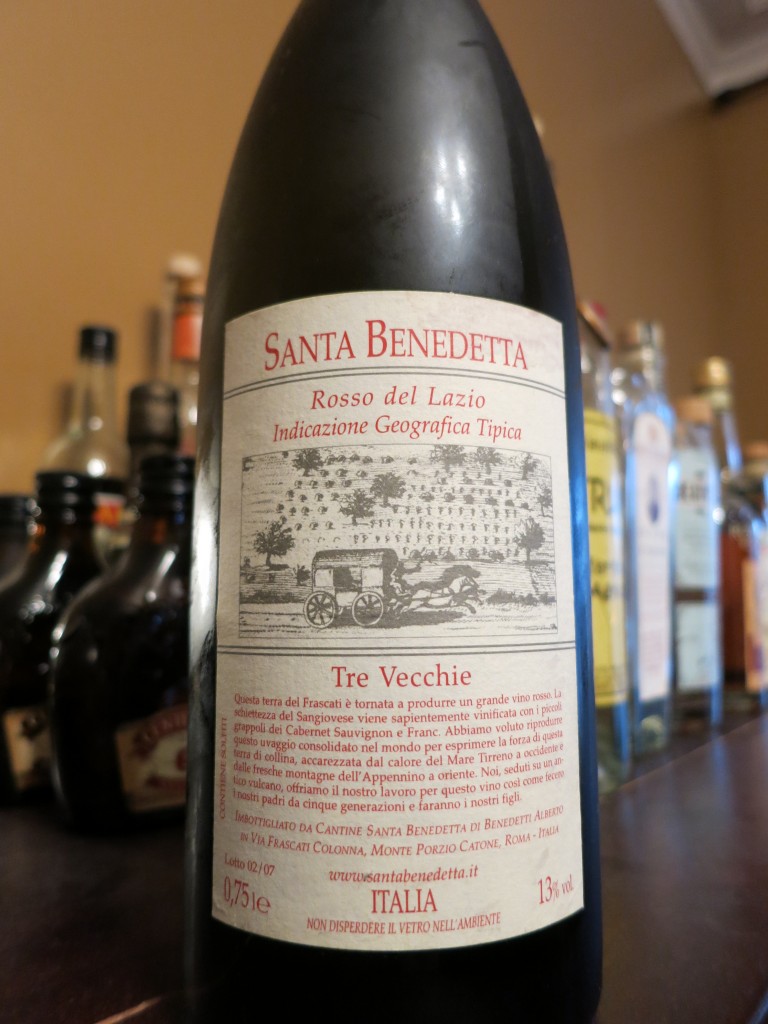 Wines from Italy’s Lazio region, also known as Latium, haven’t been celebrated since Roman times, when Falernian was all the rage. In more recent times, this swath of land around Rome has been “oddly inert in terms of wine,” according to The World Atlas of Wine. Never one to mince words, The Sotheby’s Wine Encyclopedia has much less patience for Lazio: “One of Italy’s largest regions, Latium appropriately boasts one of its largest-selling wines, Frascati, the Latin Liebfraumilch, and Est! Est!! Est!!!, probably the blandest tourist wine in existence.” Ouch.

What gave me some hope for the 2007 Santa Benedetta “Tre Vecchie” Rosso di Lazio that a colleague brought back for me from Italy was that — unusually for a Lazio bottling — it was a red wine. The Oxford Companion to Wine asserts that “an occasional Cabernet-Merlot blend of significant quality… suggests that the soil and climate are well suited to red wine production, even if no real tradition exists in the region.” And even Sotheby’s concedes that Lazio boasts two “innovative Cabernet-Merlot blends, which are very good.”

The Santa Benedetta Rosso di Lazio follows in the footsteps of the Cabernet-Merlot blends noted above, blending Sangiovese, Cabernet Sauvignon and Cabernet Franc. Because this wine makes use of international varieties and doesn’t conform to the traditions of the region, it’s classed as an IGT rather than a DOC, in the manner of a Super Tuscan.  So that makes this wine a sort of Super Latin, for lack of a better term.

According to the Santa Benedetta website — one of the most irritating sites I’ve ever encountered (it insists on playing Mozart’s “Queen of the Night” aria every time you move to a new page) — the famed Sassicaia inspired this Rosso di Lazio (red of Lazio). Though this wine from the Castelli Romani section of Lazio (south of Rome) doesn’t quite reach the lofty heights of that most coveted of Super Tuscans, it certainly was no bland tourist wine. 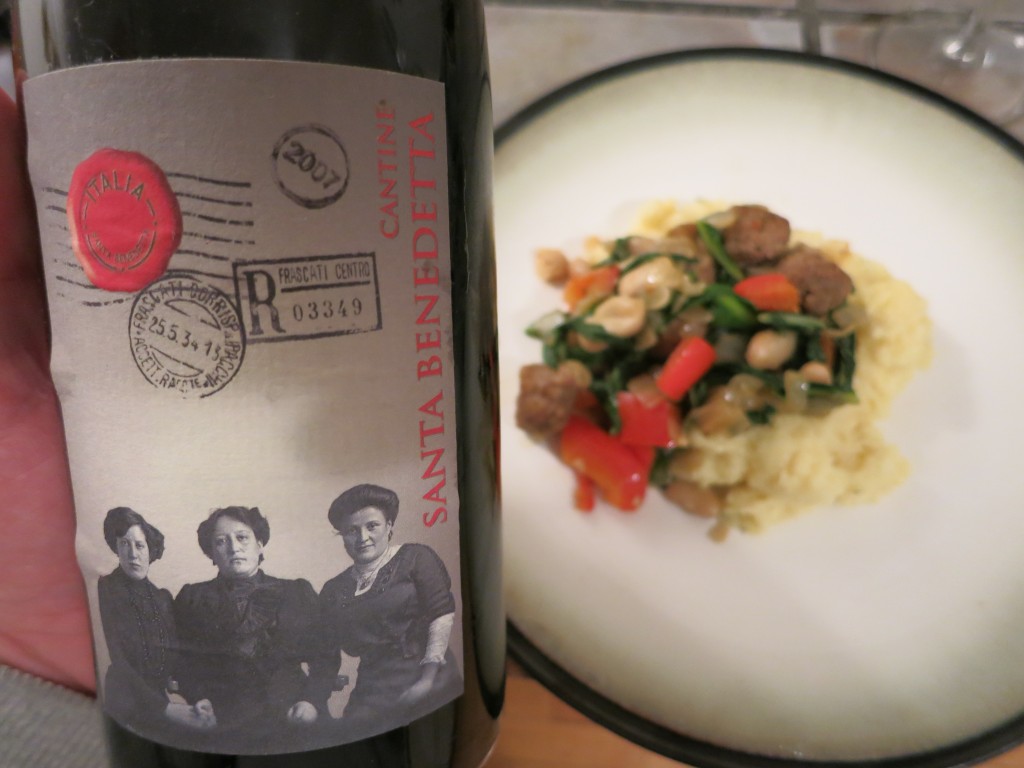 An opaque brick-red, the Santa Benedetta smelled of jammy raspberry fruit and earth. It started softly on the palate, with an opening of ripe, dark strawberries, followed quickly by some rustic acids and tannins and then a quick perk of spice. The finish moved into more earthy/irony notes. It tasted like an older wine, with undertones of wine-soaked wood — not yet over the hill, but I’m glad I opened the wine when I did.

I tried the Rosso di Lazio with some basil- and tomato-studded frittata leftover from breakfast, and it was not a good match. Neither the acids nor the spice in the wine could compete. But I opened this wine to drink with some thyme-infused polenta topped with spicy Italian sausage, cannellini beans, wilted chard, red peppers, onions and mushrooms. That pairing proved to be delicious. The wine’s acids felt livelier, and the spice got an extra lift from the sausage.

It’s still a big gamble to buy any random wine from Italy’s Lazio region, but should you happen to see a red Lazio wine incorporating international varieties such as Cabernet and Merlot, there’s a good chance you found yourself a good value. This example didn’t have as much concentration or focus as I would have liked, but it was a pleasant red all the same, and a very fine pairing for some spicy Italian cuisine.

One Comments to “An Unusual Super Latin”