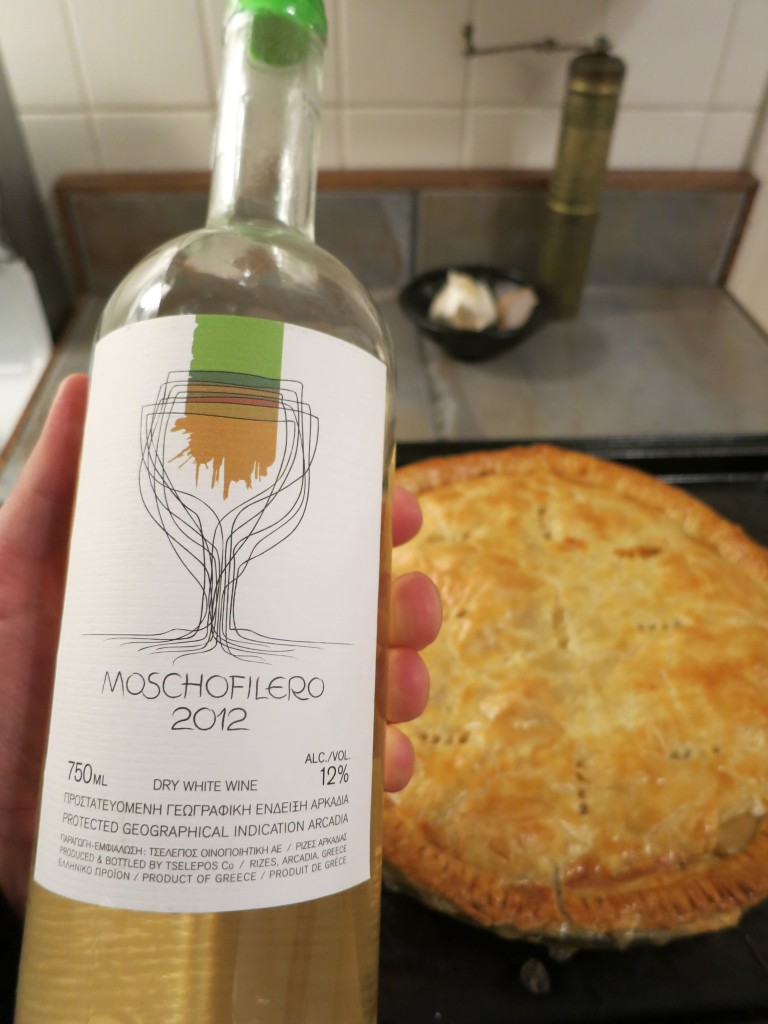 I’ve written before about Greek Moschofilero (also spelled Moscophilero), a white wine which I’ve found both exceedingly charming and slightly off-putting. The origins of this pink-skinned grape variety are “as yet obscure,” according to The Oxford Companion to Wine, and goodness knows I love a mysterious grape variety. Moschofilero also happens to usually taste rather floral and fruity, which made it ideal to pour with the season premier of Downton Abbey. Not so much because of the show, but because one of our guests preferred sweeter whites, and because I thought it would pair well with the chicken pot pie in the oven.

Why open a Moschofilero instead of a Riesling or a Gewürztraminer? For shock value, of course, and because you tend to get a lot of bang for your buck. The 2012 Tselepos Moschofilero cost me just $10 at Binny’s, and really, you’ll be hard pressed to find a well-balanced Riesling at that price.

According to the label, this particular Moschofilero is a “Protected Geographical Indication Arcadia,” which basically means the fruit for the wine could come from anywhere in that central Peloponnese province. Arcadia doesn’t qualify as an appellation, however. That distinction belongs to Mantinia, a high-altitude plateau in Arcadia, which produces wines that can command higher prices (see the Tselepos Mantinia, which costs about $5 more at Binny’s than the Tselepos Arcadia).

Beyond that, the wine is a bit of a mystery. The minimalist importer’s website shines little light upon it, and the Tselepos website doesn’t list the Arcadian Moschofilero among its bottlings. But in any case, at $10, this Moschofilero isn’t much of a risk.

A pale, pinkish yellow, this wine had a heady, sweet aroma of ripe apples, jasmine and incense. It tasted drier than I thought it would, with a bit of a prickly texture, flavors of apples and flowers, and some exotic spice underneath. The fruit was a bit flabby, to be sure, but the wine pulled together some with the pot pie. I wished it had more of a backbone, but hey, for $10, it’s quite an interesting and flavorful wine.

Would I buy it again? I would probably go for the more expensive Mantinia version if I could find it, or if I did want to only spend $10, I would buy the Kyklos Moschofilero instead.

No Comments to “Arcadian Moschofilero”

Click here to cancel reply.
Beyond Bourbon: A Kentucky Cabernet Fine Wines From The Rockies