New York has an all-too-beguiling array of craft cocktail lounges and wine bars. I had a wonderful time on my last visit, mostly confined to Lower Manhattan. But this time, for reasons too tedious to explain, I maintained a relatively tight radius around Times Square.

Times Square, in case there’s any doubt, may be “The Crossroads of the World,” but it hardly qualifies as an epicenter of fine drinking or dining. Overgrown, bloated versions of chains such as Olive Garden and Bubba Gump Shrimp are the order of the day, and, most notoriously, Guy’s American Kitchen & Bar (the New York Times review of the place ranks among the greatest restaurant take-downs of all time).

Nevertheless, with a little digging, I discovered some perfectly pleasant places for drinks and dinner just a short walk from the heart of dining darkness. 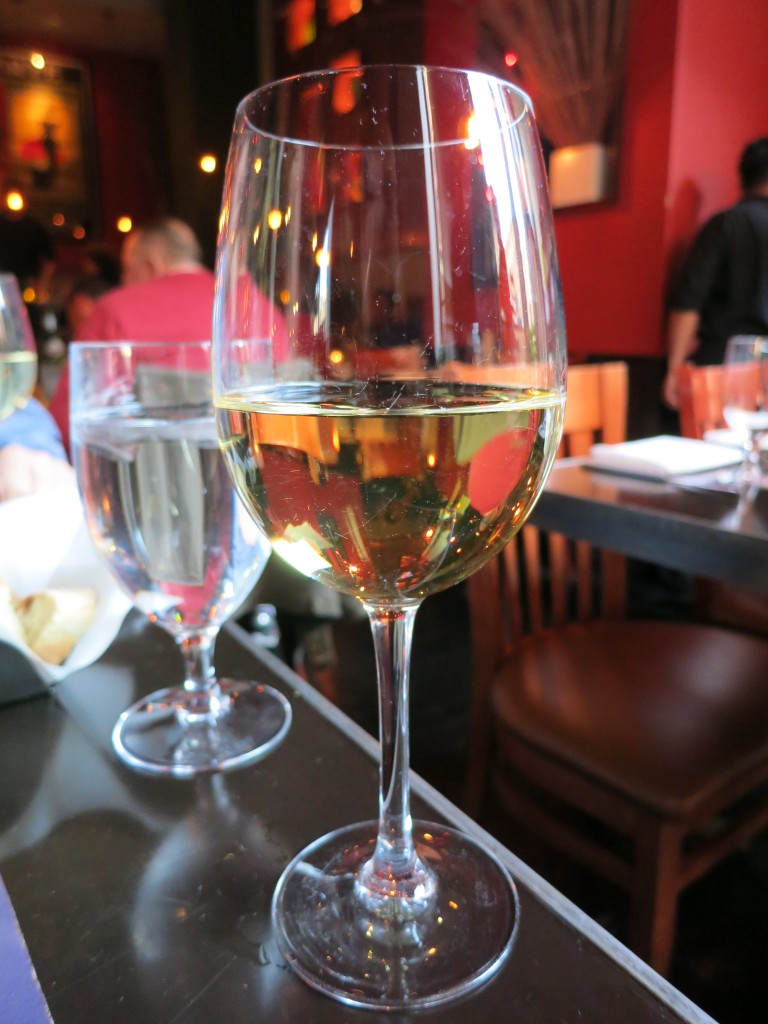 At Thalia on the corner of 50th and 8th, I found a local wine on the by-the-glass list, the only New York wine I encountered during my stay: a 2013 Standing Stone Vineyards Riesling from the Finger Lakes. The waiter didn’t really sell it — he described it as “Not too sweet. Just a little sweet. It’s good. You know, it’s good.” He seemed to be trying to convince himself as much as me.

I quite liked it, actually. It had an aroma of light honeysuckle, a little orange blossom and that telltale note I describe as “fresh shower curtain” which many Rieslings from the Finger Lakes seem to exhibit. It’s much pleasanter than it sounds. The flavor was well-balanced, with ripe pear and red apple fruit balanced by broad, orangey acids. There was a bit of sweetness there, but it finished dry. And most important, it worked well with a spicy tuna and scallop tartar. 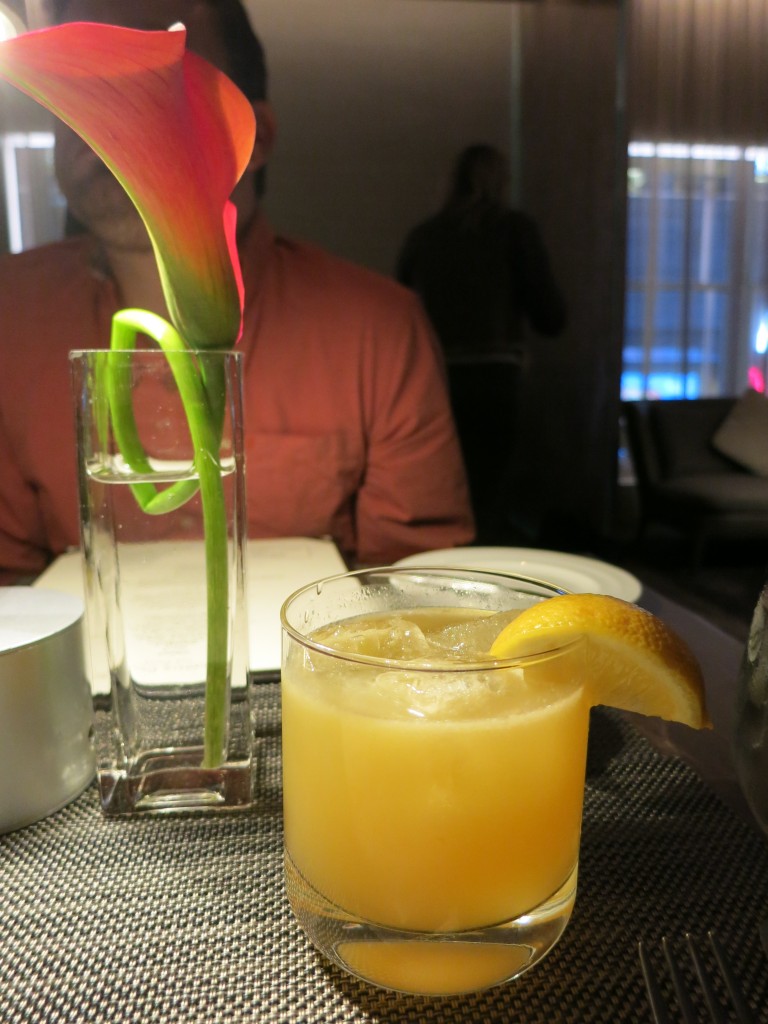 Charlie Palmer at The Knick just opened, and judging by all the empty tables around us, it’s still a bit of a secret, despite it’s location on the corner of 42nd and Broadway (its fourth-floor setting doesn’t attract foot traffic). It’s a refreshingly quiet place for a drink or dinner in this overrun neighborhood. 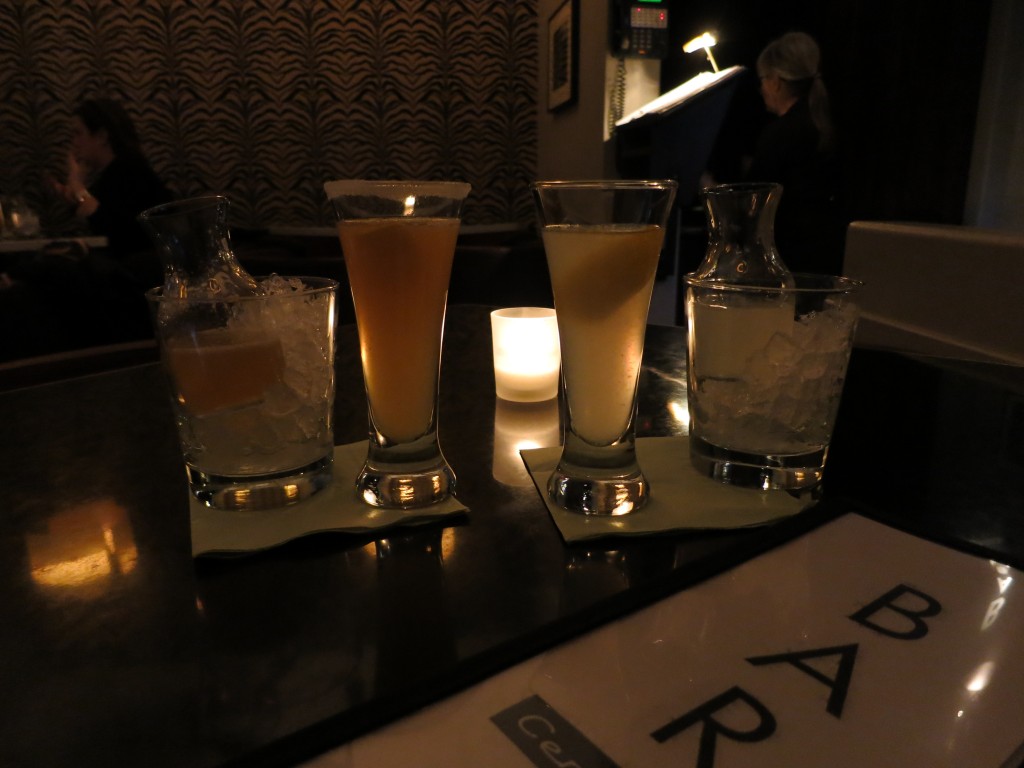 The classic cocktails at Bar Centrale may not have been especially unusual, but they tasted perfectly balanced and carefully crafted. Hidden in an unmarked brownstone townhouse on 46th and 8th, this bar is perfect for an insidery-feeling pre- or post-theater drink.

My Sidecar (cognac, orange liqueur and lemon juice) was right on the money. My friend ordered an Aviation, a drink of gin, maraschino liqueur, lemon juice and crème de violette which can all too easily become a syrupy perfume bomb. But the bartender mixed it perfectly. I could clearly identify an almond note from the maraschino liqueur, and the floral flavor of the crème de violette remained just under the surface, where it belonged.

To ensure that you have comfortable seating, reserve a table in advance. 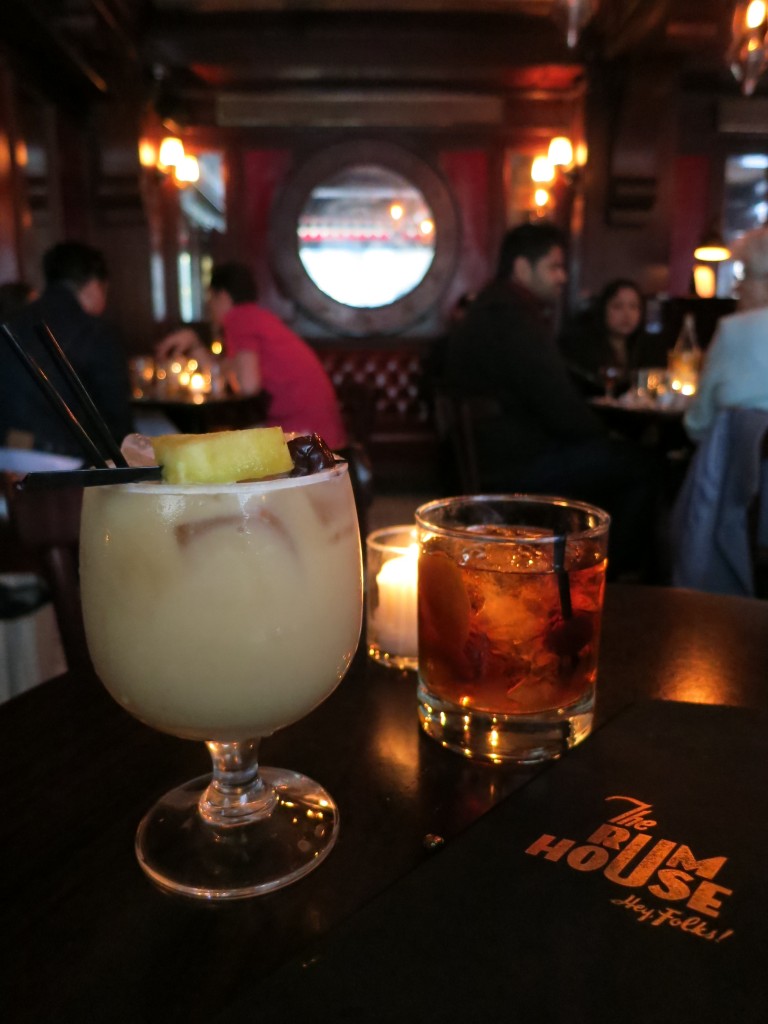 Fans of the film “Birdman” will recognize The Rum House as the bar in which Riggan confronted the drama critic. We visited on a Saturday afternoon at about 5 p.m. and had no trouble getting a table, which felt like a mini-miracle in a neighborhood thronged with theater patrons. I loved the buzzing-but-cozy atmosphere, and the drinks we ordered were beyond reproach.

My Rum Old Fashioned, though unorthodox, worked beautifully. It moved from molasses sweetness to an appealingly bitter and spicy finish. I felt very suspicious of my friend’s cocktail, The Escape, a piña colada-like blend of dark rum, coconut cream, pineapple juice and sweet vermouth. I anticipated the usual boring milkshake-like flavor, but this drink wasn’t just a sugar attack. It had a delightful nutty quality, and even a bit of depth afforded by the vermouth. 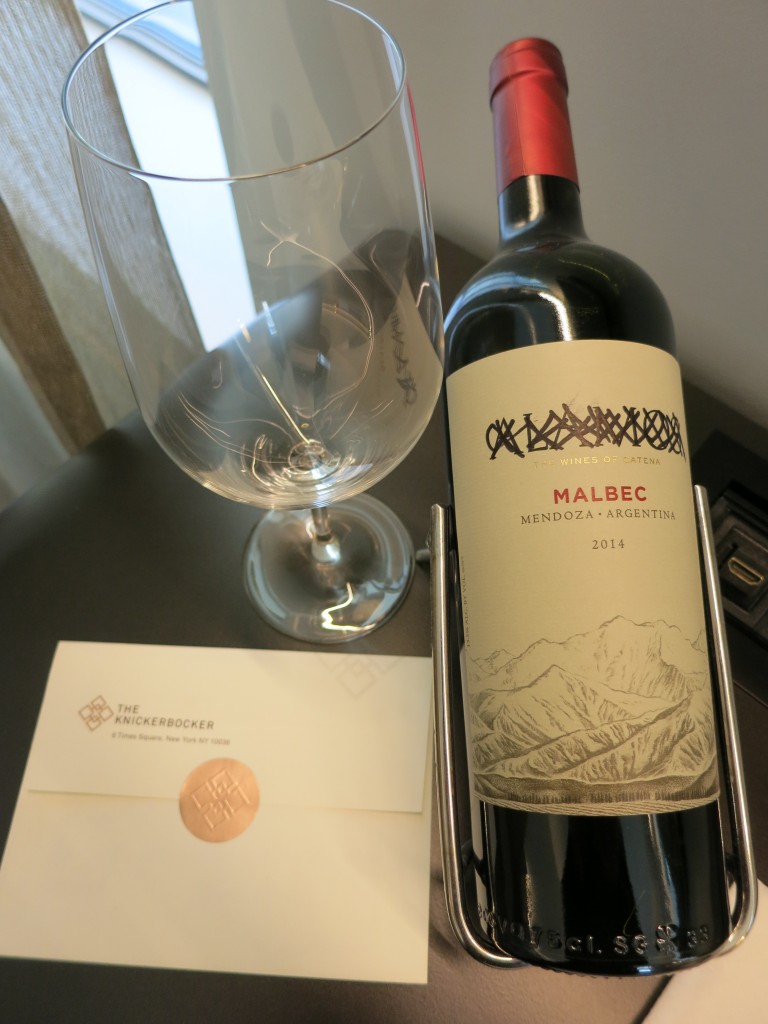 Most unusual of all was this complimentary bottle of 2014 Alamos Malbec I discovered waiting for me in my hotel room. You’ll notice how vigorously the name had been crossed out with a Sharpie marker. Was the wine poisoned? Was it cursed? I couldn’t tell, so I left it with some local friends and hopped a plane out of town.