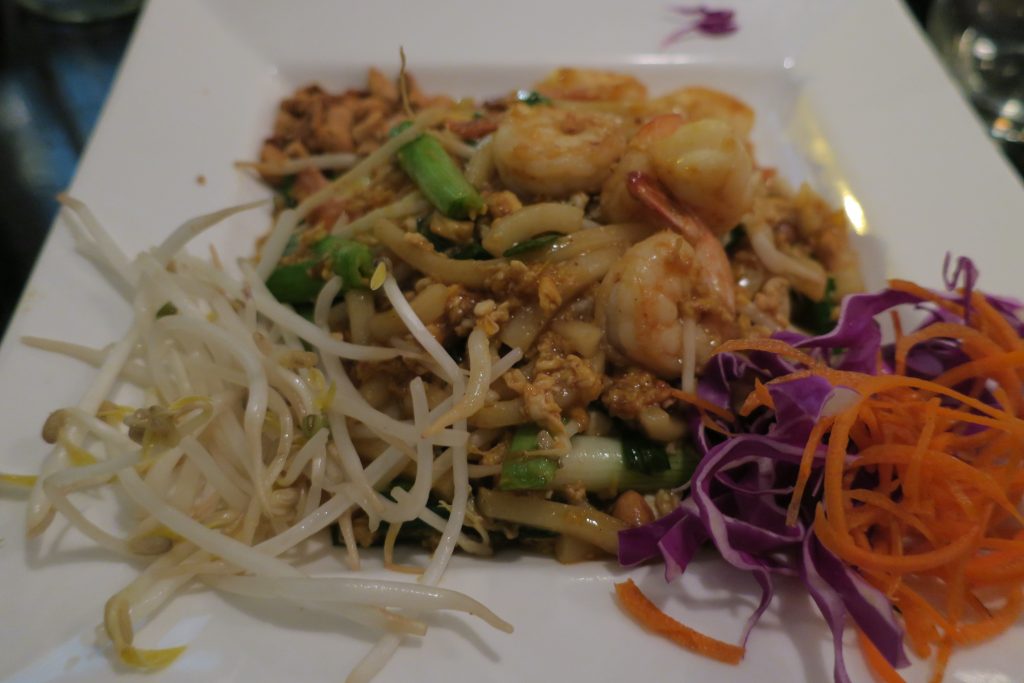 Every now and then I worry: Is this blog just a really, really elaborate cover for alcoholism? But then I glance at my wine rack, heaving with unopened sample bottles, and I realize that if I were an alcoholic, I would probably have transformed those samples into tasting notes and hangovers long ago. I feel relief, but only for a moment, because it strikes me that the wonderful PR people who sent me those dust-gathering samples would probably rather that I were an alcoholic.

In an effort to catch up, I brought two of my sample shelf’s oldest residents to Andy’s Thai Kitchen, a BYOB restaurant near the home of one of my favorite wine tasting friends, Liz Barrett, the Vice President of Corporate Communications and PR at Terlato Wines, one of Chicago’s most important wine importers and distributors. The company recently made news for severing its relationship with Santa Margherita, of Pinot Grigio infamy, and good riddance, too. (Terlato’s Friuli Pinot Grigio is ever so much better. It has important qualities lacking in the Santa Margherita, such as flavor.) 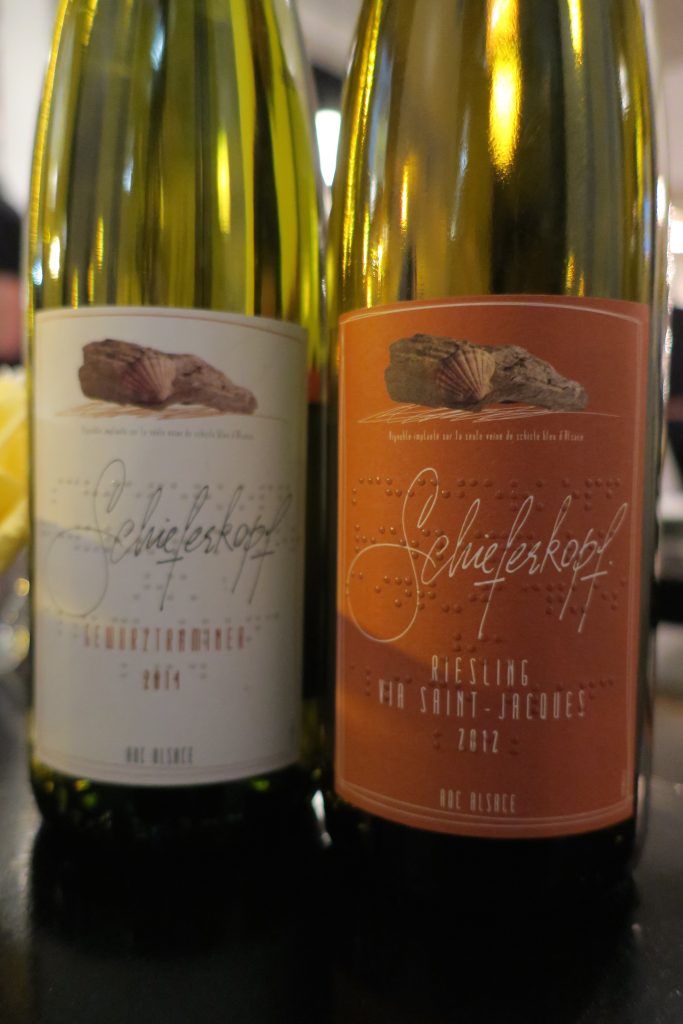 As Liz and I unloaded our wine onto our too-small table — five bottles in all — I briefly reconsidered my potential alcoholism, but that unpleasant thought was swiftly washed away by the exquisite Riesling Liz poured into my glass. Riesling and Gewürztraminer are classic choices for pairing with Thai food, and she brought along beautiful examples of each.

Both came from the Alsace, a region in eastern France along the border with Germany, which excels at producing dry whites (most famously, as luck would have it, Riesling and Gewürztraminer). Wines from the Alsace rarely lack acidity, and they sometimes even verge on the austere, making them an excellent choice if sweetness in wine gives you the heebie-jeebies.

The wines were created by Michel Chapoutier, a family wine company distinguished, according to The Oxford Companion to Wine, by “its combination of high quality, often vineyard designated, and almost restless vineyard acquisition.” Chapoutier released his first Alsatian vintage in 2011, from fruit grown “on the only vein of blue schist in the Alsace region,” according to the Schieferkopf website. “Schieferkopf” literally means “head of schist.”

The 2012 Schieferkopf “Via Saint-Jacques” Riesling lived up to its hefty price tag of about $45, with a rich attack, wonderfully juicy and focused lemon/orange acids and a surprisingly long and minerally finish. “It’s crisp and rich at the same time,” Liz noted. Absolutely. It paired beautifully with some sweet and salty chicken satay — it even cut through the heavy peanut sauce — and the wine positively sang with some savory gyoza dumplings. (Why so many Thai restaurants insist on also serving Japanese food is beyond my comprehension, but at least Andy’s didn’t attempt sushi.) 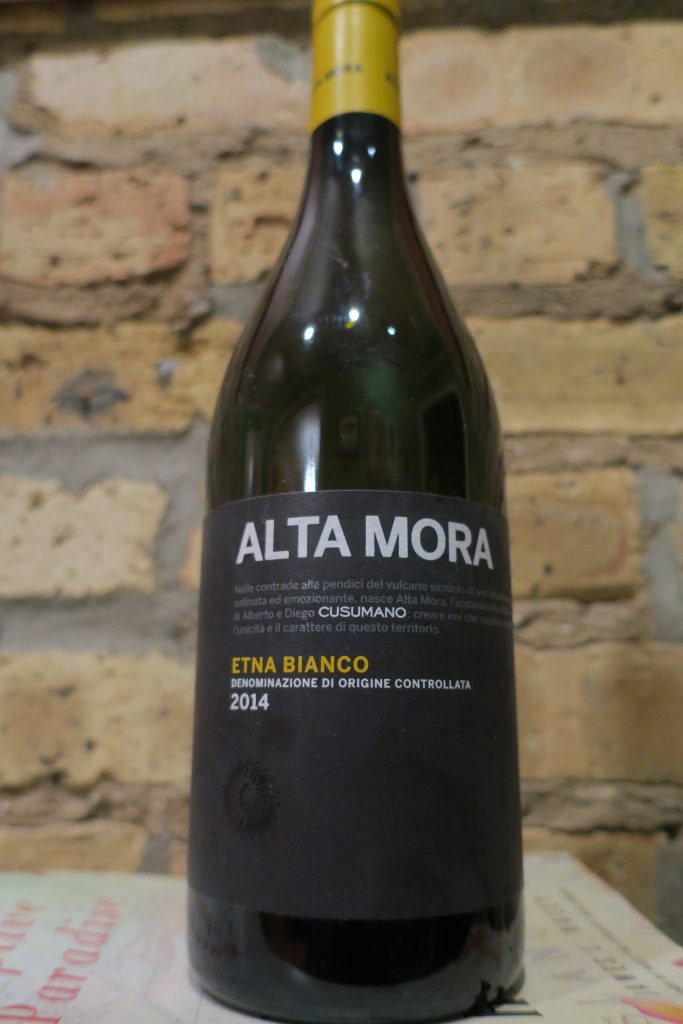 The 2014 Schieferkopf Gewürztraminer — which had a seductive nose of honeysuckle and perfectly balanced flavors of tropical fruits, taut orangey acids and exotic spice — fell rather flat with the gyoza and satay, however. It felt tamped down. But paired with an aromatic and slightly spicy dish of fermented Isaan sausage with cabbage, fresh ginger and peanuts, the wine became magnificently bright and lively. It also stood up well to some sweet and spicy pork belly as well as some slightly spicy shrimp pad Thai.

I wouldn’t be Odd Bacchus if I stuck to classic pairings, of course, and so I selected some less conventional (and less expensive) wines to sip with our Thai/Japanese feast.

Remembering how much I loved the 2010 Planeta Carricante, with its lush fruit and incense-like spice, I brought along a bottle of 2014 Alta Mora Etna Bianco, made from 100% Carricante, an ancient grape variety grown on the slopes of Mount Etna. Etna wines have become rather fashionable these days, and when you sip wines like the Planeta and the Alta Mora, it’s easy to see why. Again, I noted something exotic and “incensy” in the nose, and the wine had some real heft on the palate. Nevertheless, it felt taut and dry, with some tart acids and an impressively long finish.

The Alta Mora worked well with the gyoza (though not as beautifully as the Riesling), and even better with the Isaan sausage. It became more integrated with the food, pairing well with just about everything on the table. But it was two days later when this wine most impressed me. I had taken the mostly full bottle home with me and stored it in the fridge. I thought that after two days, it would be barely drinkable at best, but it still tasted mostly intact. I suspect this wine could age well for a number of years. A fine value for about $20 a bottle. 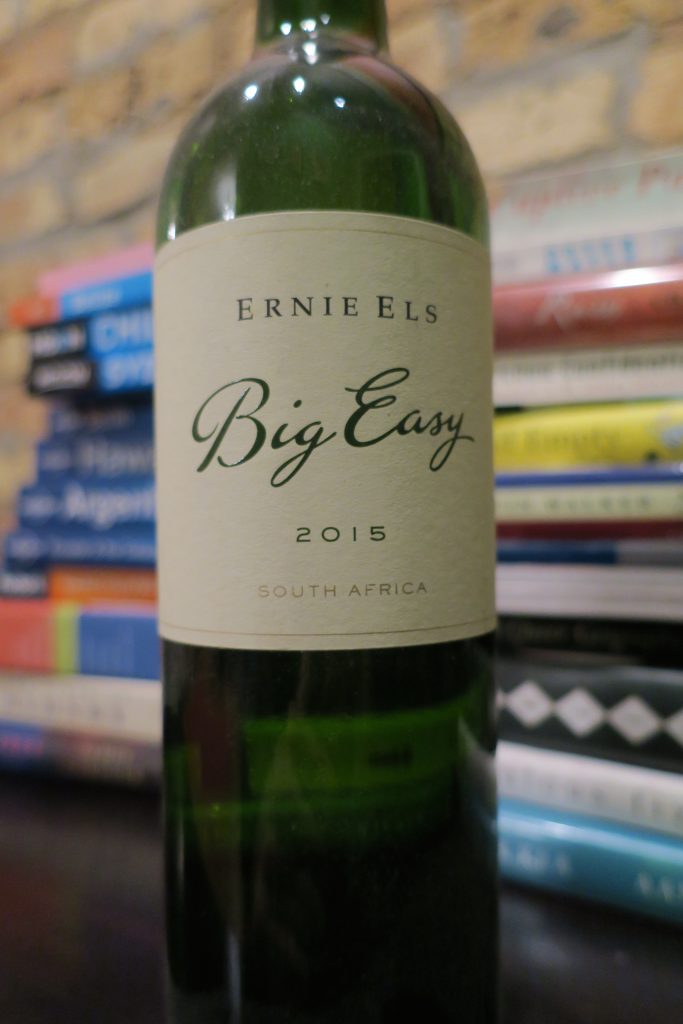 The 2015 Ernie Els “Big Easy” Chenin Blanc from South Africa also paired generally well with all the food on the table. It tasted very citrusy, with broad, orangey acids, and it had a spicy gingery finish. The wine retained its acids and spice when matched with the satay and peanut sauce, and with the Isaan sausage it became even bigger and spicier. “This is just the right Chenin for this food,” Liz remarked, and I agreed. I wouldn’t hesitate to spend $15 of my own money on a bottle.

If you’re a red wine lover, I hope you haven’t given up on this post just yet. I also brought along a 2013 Nadler “Rote Rieden” Zweigelt from Carnuntum, in far eastern Austria. Austria made its name in the United States with Grüner Veltliner and to a lesser extent Riesling, but it also produces reds of notable character, including Zweigelt. (See my posts about velvety Austrian St. Laurent here.)

This Zweigelt had a light body — ideal for pairing with this sort of food — but no shortage of flavor: cherry, earth, mocha, black pepper… Liz also detected “something herbal, like eucalyptus.” It worked especially well with the pork, which turned the wine’s fruit darker and amped up the black pepper note. Not too shabby for a $13 bottle of wine!

So what do you pair with your favorite Thai treats? That depends. If you plan on ordering some spicy dishes, and you don’t abhor somewhat floral whites, go for a Gewürztraminer. A dry Riesling would be best if you plan on ordering dishes that are more savory than spicy. A light-bodied red like the Zweigelt would be ideal for meaty dishes, both savory and spicy. And if you like a variety of different Thai foods, an Etna Bianco or a Chenin Blanc should work well with a range of dishes.

When in doubt, choose two different bottles. Or better yet, five. After all, it doesn’t necessarily mean you’re an alcoholic.

Note: These wines, with the exception of the Nadler Zweigelt, were samples provided free of charge. 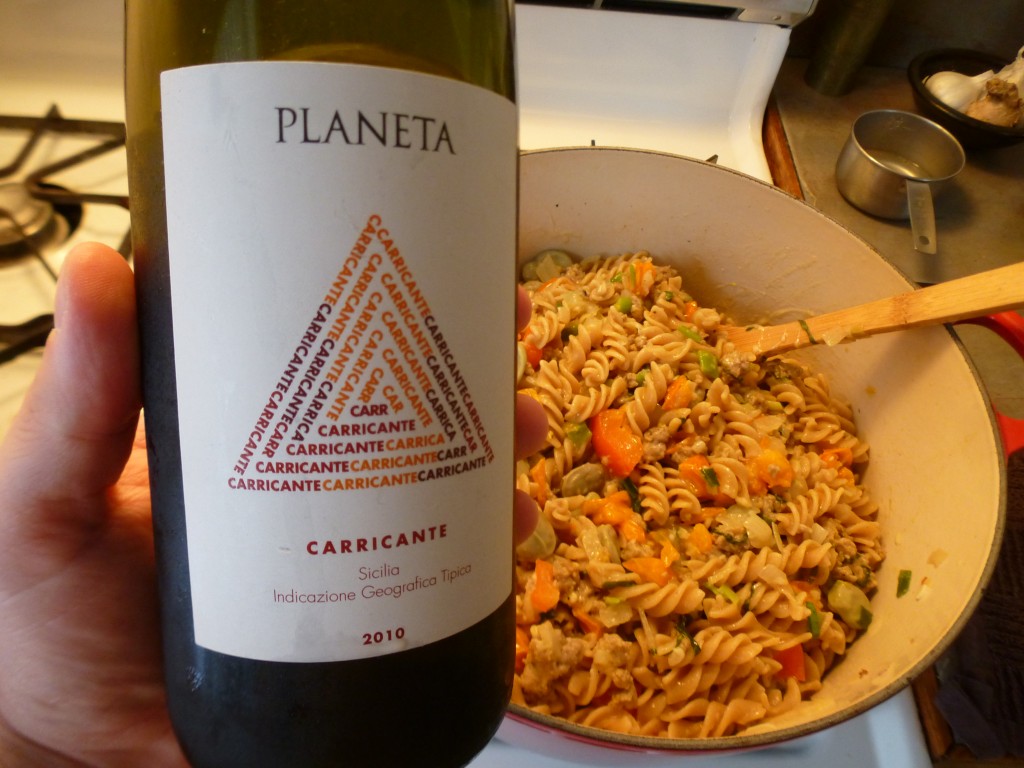 Over the years of writing this blog, I’ve tasted a lot of unusual wines and spirits, but I can’t recall ever finding a wine made from a variety which does not appear in my 2006 edition of The Oxford Companion to Wine. If a grape isn’t listed in that weighty tome, it must be seriously obscure.

But I can’t really take the credit for “finding” this wine — it found me. A colleague was traveling through Sicily, and while drinking wine with the general manager of Rocco Forte’s Verdura Resort on the southern coast, she brought up my blog. The thoughtful manager gave her a special bottle of Sicilian wine to bring back for me to taste, which she packed in her bags and presented to me upon her return. I finally opened it over dinner last Sunday. It made me want to jump on a plane then and there to thank that hotel manager personally.

The 2010 Planeta Carricante blew me away, but what is it? I was at least familiar with its homeland of Sicily, an island celebrated for its wines since ancient times. But between 1960 and 1987, the Oxford Companion notes, misguided governmental subsidies encouraged producers to focus on quantity over quality, leading to overproduction and declining prices. Things began to turn around in the last 20 years thanks in no small part to the very winery responsible for this Carricante.

According to The Sotheby’s Wine Encyclopedia, after Planeta established its winery in 1995, “the wines started to attract attention and growing respect in the  early 2000s, and Planeta is now not only the island’s top producer, but also one of Italy’s greatest.” The World Atlas of Wine agrees with this history, noting that “The regional wine institute, under the direction of Diego Planeta and through the innovative and savvy Planeta family winery, has put modern Sicilian wine on the world map.” If anyone could make a good Carricante, then, it would surely be Planeta.

But what is Carricante, this mysterious variety absent from the Oxford Companion? The World Atlas of Wine at least mentions Carricante, calling it Sicily’s “tartest” variety and noting its capability to “age gracefully for up to 10 years.” The Wine Searcher website delves further, noting that this grape is “thought to have been growing on the volcanic slopes of Mt. Etna for at least a thousand years,” going on to describe the growing conditions and vinification techniques ideal for this “ancient” variety. Wine Searcher also warns us not to mistake Carricante for its common blending partner Catarratto, “a variety for which (somewhat confusingly) Carricante is often confused.”

If you can make it past this confusing confusion, I highly recommend seeking out a bottle of the Planeta Carricante (the 2010 was 100% Carricante, but the current vintage contains 5% Riesling). Its wonderfully seductive aroma had notes of honey, cedar and lily of the valley, one of my favorite flowers (a little like jasmine). A fellow taster remarked that “It smells like the best Kasugai gummy ever created.” I loved the lush fruit, flinty minerals and the focused, almost incense-like spice that just kept going and going. Paired with some pasta with orange cherry tomatoes, fresh fava beans, onions, olive oil, garlic and ground pork, the wine’s acids became even juicier and zestier.

It was rich, complex, balanced and elegant, but even more impressive, the wine took me right back to Sicily. I could imagine myself at some trattoria in Taormina, sipping a glass at an outdoor table while I took in the view of Mt. Etna and the sea, a little incense wafting out of a nearby church. This was a wine truly expressive of its terroir.

The Planeta Carricante might be hard to come by, but it’s certainly not unlikely that you’ll run into another wine by Planeta. If this Carricante is any indication, it’s a winery worth remembering.

Note: This wine was provided free of charge by Rocco Forte’s Verdura Resort.