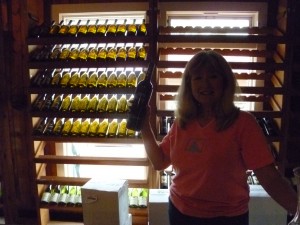 The light-bodied Cabernet Franc (a blend of 2010 and 2011 vintages, since the 2011 vintage was marred by Hurricane Irene) had an aroma of dark fruit and iron, and it tasted fruity and earthy with some good structure. Jefferson Vineyards was the first to bottle a varietal Petit Verdot in Virginia, and the 2010 vintage continues that proud tradition. It had a jammy nose and plummy, meaty flavors with juicy acids and a touch of tobacco in the finish. And the rich Meritage (rhymes with “heritage”), a Bordeaux-style blend, smelled marvelously rich and had a palate to match: jam, vanilla, balanced acids and a chocolatey finish. Delightful. 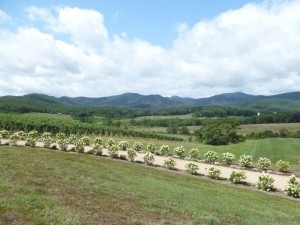 3. PIPPIN HILL FARM: The wines here tasted just fine; a through-line seemed to be rather limey, occasionally pointy acids in many of the whites and some of the reds. I’m not necessarily dying to try any of them again, but I would kill to be back on the gorgeous terrace outside the tasting room. My stars and stripes, what a view! Vineyards, farms, mansions, the Blue Mountains in the distance…

It’s truly spectacular. A glorious place for lunch and a glass of wine.

2: BARBOURSVILLE VINEYARDS: One of the first modern wineries in Virginia, Barboursville was founded in 1976 by the Zonins, a renowned Italian winemaking family. As you might expect, you’ll encounter several Italian varietals here, such as a r 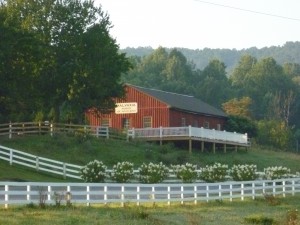 ichly fruity Sangiovese, an earthy Barbera and a tightly wound Nebbiolo. The sharply focused Viognier Reserve, austere Octagon (a Bordeaux-style blend) and Sauternes-like Malvaxia Reserve also made quite an impression on me.

Because the tasting room can be quite crowded, especially on weekends, I recommend trying the wines paired with some wonderfully delicious Italian cuisine in the adjacent Palladio Restaurant. The Caprese salad with perfectly ripe heirloom tomatoes and sumptuously creamy burrata cheese haunts me still. Work off lunch with a stroll past the vineyards to the ruins of Governor James Barbour’s mansion, dating from the early 19th century.

END_OF_DOCUMENT_TOKEN_TO_BE_REPLACED

A Weekend In The Country 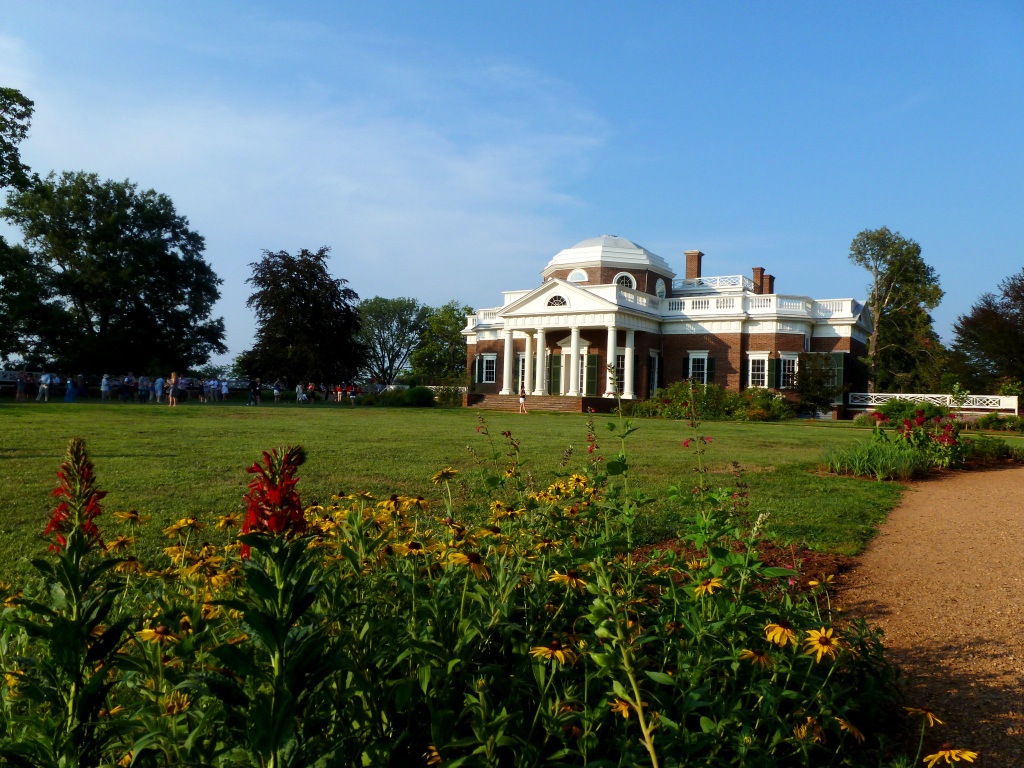 Monticello: The beginning of the U.S. wine industry

Now that I’ve undoubtedly frustrated you by describing all sorts of wonderful Virginia wines that you can’t find in your local wine shop, I thought I had better come up with a way for you to try them at the source. Here is a great itinerary for a long weekend in Virginia wine country:

Thursday: Fly to Charlottesville. If you’re coming from Chicago, take advantage of the new non-stop flights from O’Hare with American Airlines (my tickets cost about $215). Pick up a rental car at the airport and drive to the Clifton Inn, a manor house built by Thomas Jefferson for his daughter, set on 100 rolling acres. Check in and relax at this elegant estate before driving to downtown Charlottesville.

Friday: Spend this morning at Monticello, Jefferson’s Palladian-style mansion. Wander the gardens, stand in Jefferson’s renowned wine cellar and tour the house itself, still decorated with Jefferson’s personal furnishings. The history and beauty of this great house are thrilling — it gave me chills to visit.

Drive to nearby Barboursville Vineyards, Virginia’s most famous winery, and have lunch in their renowned Palladio Restaurant. After a stroll along the vineyards to the evocative ruins of Governor Barbour’s mansion, tour the cellars and taste their superb wines. The nearby Horton Vineyards is also well worth a visit. Where else could you taste a sparkling Viognier, an Rkatsiteli, a Petit Manseng, a Tannat and a Pinotage, and have them all be delicious?

Return to Clifton for some time to relax at the infinity pool before dinner in their romantic gourmet restaurant. END_OF_DOCUMENT_TOKEN_TO_BE_REPLACED