He goes into more specifics, describing which islands hold the most important vineyards (Kelleys, North Bass and South Bass) and which varietals are most commonly planted (Catawba and Delaware). 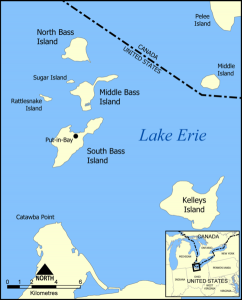 Sandusky is hardly Beaune — what happened to these islands that once figured so prominently in the United States’ wine scene? I did a little research, and discovered that in the late 19th Century, the Golden Eagle Winery on Middle Bass Island was reputed to be the largest in the country. Peter Lonz purchased the winery, maintained it through Prohibition and kept it going until his death in 1969. The Lonz Winery continued to operate, though some of its vineyards had to be auctioned off to satisfy creditors. Then in 2000, a terrace collapsed, killing one and injuring 80, and the winery closed its doors for good. The State of Ohio now owns the property, and plans on turning it into a park. (Sources: Lonz Winery and Middle Bass on the Web.)

You can see some of the vineyards in this historic photo of Lonz Winery, which today looks to be surrounded only by trees. Other wineries faced similar fates. Bretz Winery, also on Middle Bass Island, closed in 1983. The vineyards of Kelleys Island, which annually produced 500,000 gallons of wine before Prohibition, are now mostly forest, and the one winery remaining on the island imports the majority of its grapes from mainland Ohio, Pennsylvania and New York.

According to “The Wine Islands of Lake Erie,” an article published in the June 1873 issue of Harper’s, Ottawa County (which encompasses the Lake Erie Islands) contained 2,082 acres of vineyards. In 1999, a paltry 195 acres are dedicated to the grape (Source: Integrated Pest Management).

Heineman’s Winery, with 50 acres of vines on South Bass Island, is the only winery left (that I can find) with any significant vineyard acreage.

What happened to this once-important wine region? Prohibition surely bears much of the blame, but the winemakers themselves may not have exploited the Lake Erie Islands’ full potential. Mr. Schoonmaker laments the state of the islands’ wine in 1941: “Lovely and charming though the Sandusky–Lake Erie region is, the wines are decidedly disappointing. Too many–far too many–wines are falsified, are heavily dosed with sugar, or are blended with cheap California wines.”

I’m left to wonder what might have been on these lovely little islands in the lake. Had Prohibition not devastated the wine industry, and had the mid-century winemakers focused on higher-quality dry wines from native labrusca and imported vinifera varietals, might we now be seeking out wines from South Bass as much as Sonoma?

UPDATE: Be sure to check out my April 18th post about Firelands Winery.