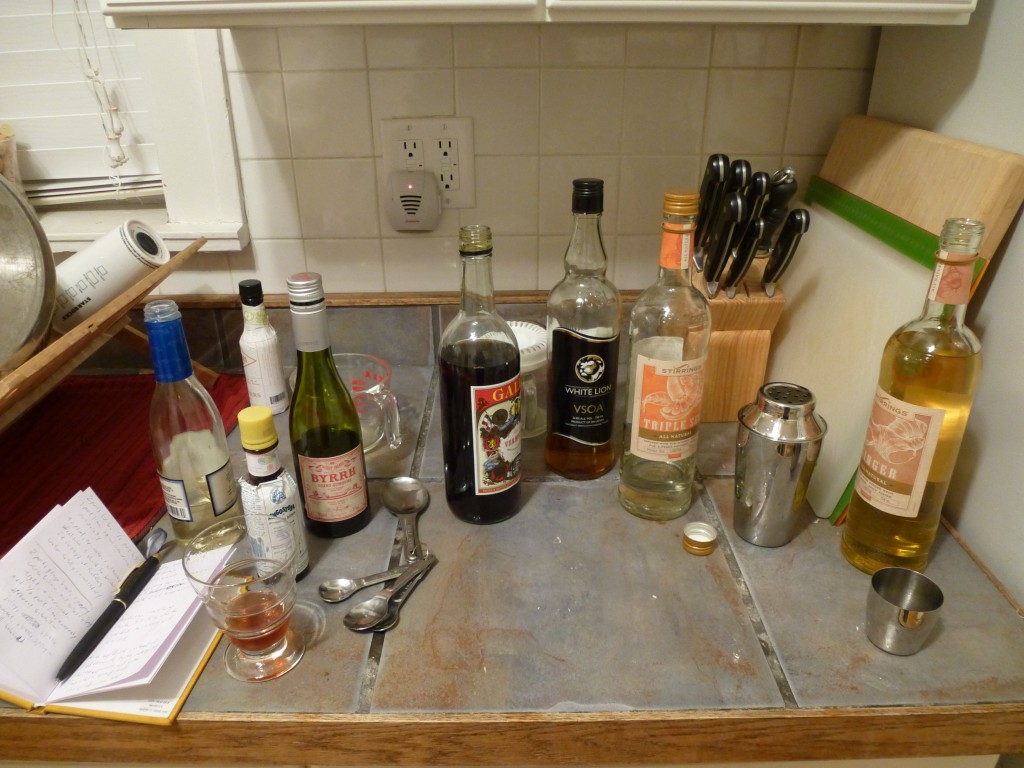 After I tasted White Lion VSOA‘s cognac-like flavor, I couldn’t wait to try working with it in some cocktails. This Sri Lankan spirit is distilled from the nectar of unopened coconut flowers, but it doesn’t taste especially like coconut. It starts sweet and smooth, gets spicy, and finishes with something savory and herbaceous (you can read more about White Lion VSOA in my previous post).

Because it reminded me of cognac, I wanted to see how it would perform in a classic Sidecar recipe.

Juice your lemon, and use the amount of juice you get as the measure of one part. A standard lemon will make one large Sidecar or two small ones. Combine all the ingredients in a shaker with ice, shake vigorously, and strain into a martini glass. It’s traditional to rim the glass with sugar, but I can’t be bothered with that sort of thing. The cocktail had a luscious aroma of orange and caramel, and its darkly sweet flavors were balanced perfectly by the bright citrus. It’s a smashing drink, and I made myself a second round the next day.

I’d experimented previously with ginger liqueur, and I had some success substituting it for the orange liqueur in the recipe above. This WHITE LION GINGER SIDECAR tastes wonderfully spicy and exotic, but the ginger can get a little overpowering if you use the proportions above. I recommend 2 parts White Lion, 3/4 part ginger liqueur (Koval or Stirrings), and 1 part freshly-squeezed lemon juice.

The White Lion website recommends a number of different cocktail recipes, including an “Aria,” which combines White Lion, lime juice, simple syrup and a lot of water. But why add the water? As my father is fond of saying, “Fish swim in it!” I tried the recipe without any dilution, and I don’t think it suffered:

As before, juice your lime(s) first, and use the amount of liquid you get as the measure of one part. Combine the ingredients in a cocktail shaker with ice, shake vigorously, and strain into martini glasses or cocktail coupes. Garnish, if you like, with a lime wheel or wedge. This cocktail, in which White Lion takes the place of rum, tasted tropical, aromatic and citrusy — I felt like I should be drinking it in the courtyard of the Raffles Hotel in Singapore. Exotic and delicious.

Another recipe the White Lion website recommends is a classic arrack/ginger beer cocktail they call a GBA. I tried that combination, which is essentially a Dark ‘n’ Stormy substituting White Lion for rum, and I didn’t find it satisfying. It felt a little tight to me, and not rounded. Since I’d already juiced some limes, I decided to take it in more of a Moscow Mule direction. That worked wonders:

–2 parts Ginger Beer (Use the very best you can find. My go-to ginger beer is Reed’s.)

To maximize fizz, pour your chilled ginger beer in an empty tumbler. Carefully add a couple of large ice cubes, and then top off with the lime juice and White Lion. Give the drink a gentle stir to incorporate the ingredients. With the addition of the lime juice, the cocktail took on a new dimension, becoming a little sweeter, a little spicier, and definitely more well-balanced. A traditional Moscow Mule also includes mint, but I didn’t have any on hand, and so neither does this recipe.

I also attempted a classic Manhattan recipe using the White Lion, and again, it required a little tweaking for my palate. My first try, which combined White Lion, sweet vermouth and Angostura Bitters, tasted a little dry to me, but those who enjoy Perfect Manhattans will love this cocktail. I changed out the sweet vermouth for some Byrrh, and that made a cocktail I could really get behind:

Combine all the ingredients in a cocktail shaker with ice. Shake vigorously, or if you’re not rushed, try stirring everything for a minute or two to achieve an extra-smooth texture. The resulting red-orange cocktail tastes intriguingly sweet, bitter and savory, with some menthol and spice on the finish.

Finally, since White Lion is distilled from coconut flower nectar, I wanted to try mixing it with coconut water. That combination unfortunately tastes terrible. A little lemon juice helps immensely, however, especially if you like your cocktails on the savory side. Since this is the last cocktail in my White Lion round-up, I’ll call it the

As before, use the amount of juice you get from your lemon as the measure of a part. Combine the ingredients in a shaker with ice, and shake vigorously. Strain into a martini glass, or — why not — into a coconut shell. This mix has a uniquely savory flavor which is not at all unpleasant. You can omit the simple syrup, but I found that it brightened the citrus notes considerably.

These recipes but scratch the surface of the potential of White Lion in cocktails. It’s currently available online and in California, but expect distribution to the Midwest and East Coast in the near future. It can’t come to Chicago soon enough for me — I’ve already knocked off most of my bottle! 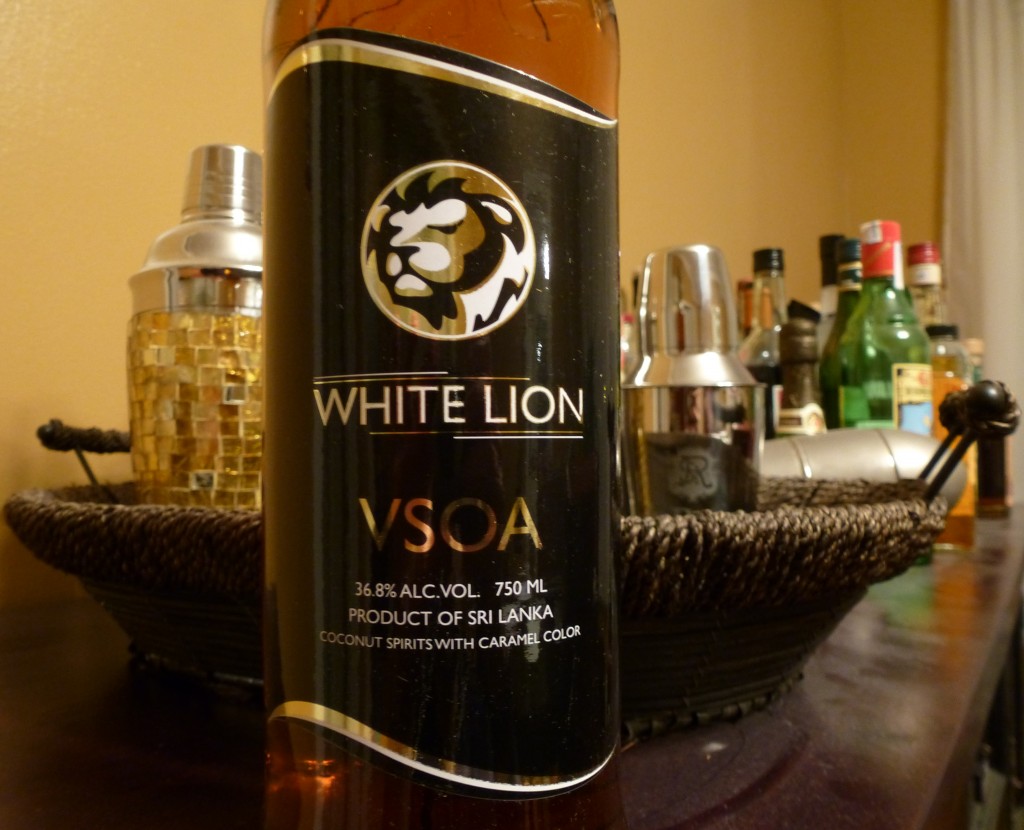 With a little searching, it’s not all that hard to ferret out unusual, small-production whiskies, brandies, gins, rums and vodkas. But it’s rare that I get the chance to sample a class of spirit that’s entirely new to me. It’s always a risk — sometimes the drink will be a delicious discovery, and sometimes the flavor will be unrelievedly appalling. I approached my bottle of White Lion VSOA with hope and trepidation.

VSOA stands for “Very Special Old Arrack,” which might make you think of the anise-flavored spirit called arak, which comes from the Middle East. United States labeling laws allow only this grape-based raki/ouzo/pastis-like spirit to be called arak or arrack, and White Lion qualifies neither in terms of composition or flavor. Nor is this arrack related to the sugarcane-based Batavia arrack of Indonesia. This arrack from Sri Lanka is distilled from the nectar of unopened coconut flowers.

I had trouble believing that coconut flowers could provide enough nectar to make a spirit in any quantity, but according to an uncited reference on Wikipedia, up to two liters of nectar can be harvested from a tree in a single day.  On its website, White Lion also takes pains to illustrate how its product is sustainable, comparing bleak photos of fields harvested for whiskey and vodka compared to verdant images of coconut palms, which are essentially undamaged by the nectar-gathering process.

After the nectar is collected, it begins to ferment almost immediately, and White Lion begins the distillation process just hours after harvest. The spirit is then transferred to barrels made of local halmilla wood, where it ages for two years before master blenders create the final product. If the White Lion website is to believed, “Marco Polo commented about this wonderful spirit in his 13th century travelogue, Il Milione, forever documenting it as a legendary beverage, and the predecessor to nearly every new world spirit.”

Surprisingly, considering that White Lion VSOA is made solely from coconut flower nectar and water, the spirit doesn’t taste much like coconut at all. At room temperature, the VSOA had appealingly fragrant aromas of bright vanilla cake and caramel. If I hadn’t known what I was smelling, I might have guessed it was some kind of sweet cognac. It starts sweet and smooth on the palate, before blossoming into white-peppercorn spice and an aromatic finish of something savory and herbaceous. Fascinating and delicious.

FIND IT: I purchased my bottle from Caskers, a website devoted to small-batch spirits, for $33 plus $10 for shipping (it’s no longer for sale there, however). According to White Lion’s website, you can purchase bottles from Vendome Wine & Spirits ($25), Old Town Liquor ($27), and Hi-Time Wine Cellars ($24). (And yes, I am feeling a little shafted by Caskers just at the moment.)

As much as I enjoyed sipping the White Lion VSOA neat, it struck me as a versatile cocktail ingredient. I put on my mixologist cap and got to work, and I discovered more than one thoroughly delightful drink.

Up Next: Six easy and delicious cocktails you can make with White Lion.