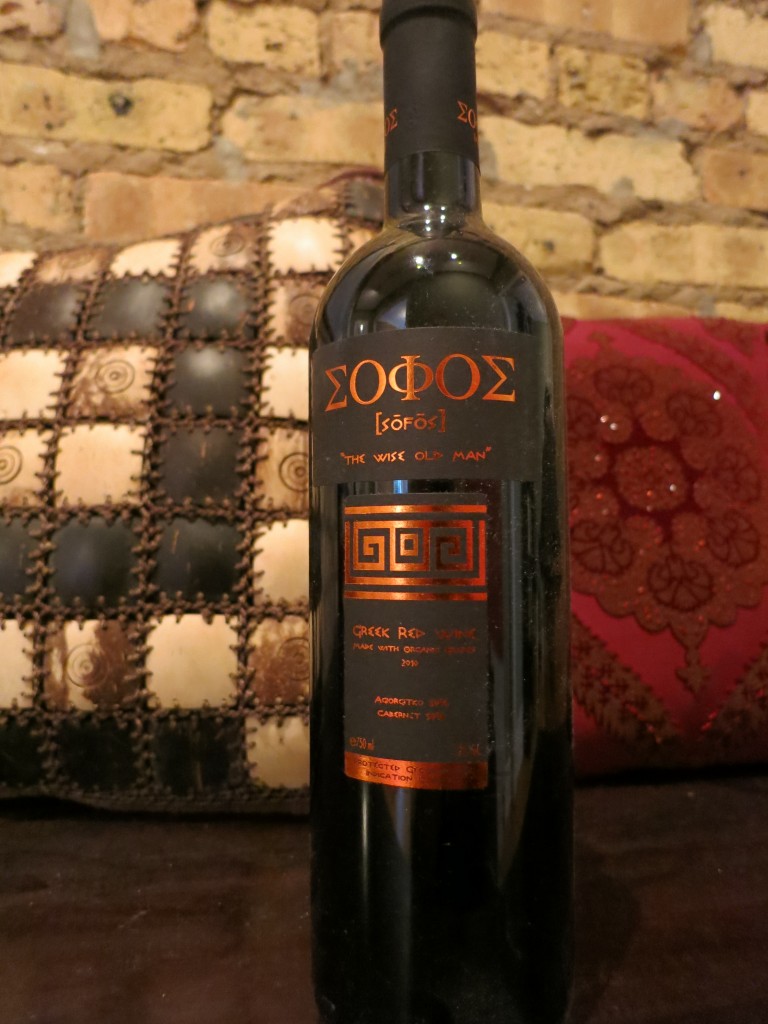 I’ve been having a lot of luck with Greek wines lately, so it was with no hesitation that I accepted free samples of two “Sofos” blends from the Peloponnese Peninsula. These wines, produced by Domaine Gioulis, intrigued me for two reasons besides their Greek origin. They each blend an indigenous Greek variety with a well-known international grape, and they are each organic.

In fact, the vineyards which produced these wines are the first in Greece to be “Non-GMO Project Verified.” I’m not convinced that GMOs (genetically modified organisms) are especially widespread in the wine industry — The Oxford Companion to Wine notes that there have been field trials, but “consumer resistance in parts of Europe has been considerable,” and it’s not even clear if genetically modified vines can legally retain their varietal name. Nevertheless, if you wish to be 100% sure that you’re avoiding anything produced from GMOs, these wines are for you.

Both come from the Klimenti region, a “Protected Geographical Indication” (PGI) adjacent to Neméa, one of Greece’s very best wine regions. As The World Atlas of Wine explains, Neméa (and Klimenti too, according to a Sofos press release) has “milder winters and cooler summers than one might expect,” because of the influence of the Mediterranean and the high altitude, respectively. Sofos’ vineyards grow at 750 meters (about 2,500 feet), quite close to the highest zone of Neméa at 2,950 feet. At these altitudes, the vineyards produce “fine, elegant, almost “cool-climate reds,” according to the Atlas.

Sofos (which means “wise old man”) makes its red wine from 50% Agiorgitiko, a variety indigenous to the Neméa region which “can yield long-lived reds” from grapes grown in higher vineyards, according to the Oxford Companion. The other half of the wine is Cabernet Sauvignon, a variety with which Agiorgitiko blends notably well, the Companion asserts.

The high-altitude vineyards and ideal blending partners pay off in the bottle. Enticingly purple and opaque, the 2010 Sofos Red‘s fruit and minerality were evident at first sniff. “It’s that rocky, chalky stuff,” a tasting partner remarked, and another detected “an undertone of super-sweetness in the aroma.” I agreed, smelling chalk, vanilla and red berries in the nose. It started with surprising lightness on the palate, given the deep color, with bright red fruit that darkened and broadened into purple plums, followed by orangey acids and some beefy tannins. Paired with a sausage pizza, spicier notes came to the fore. Quite a value for about $12 a bottle. 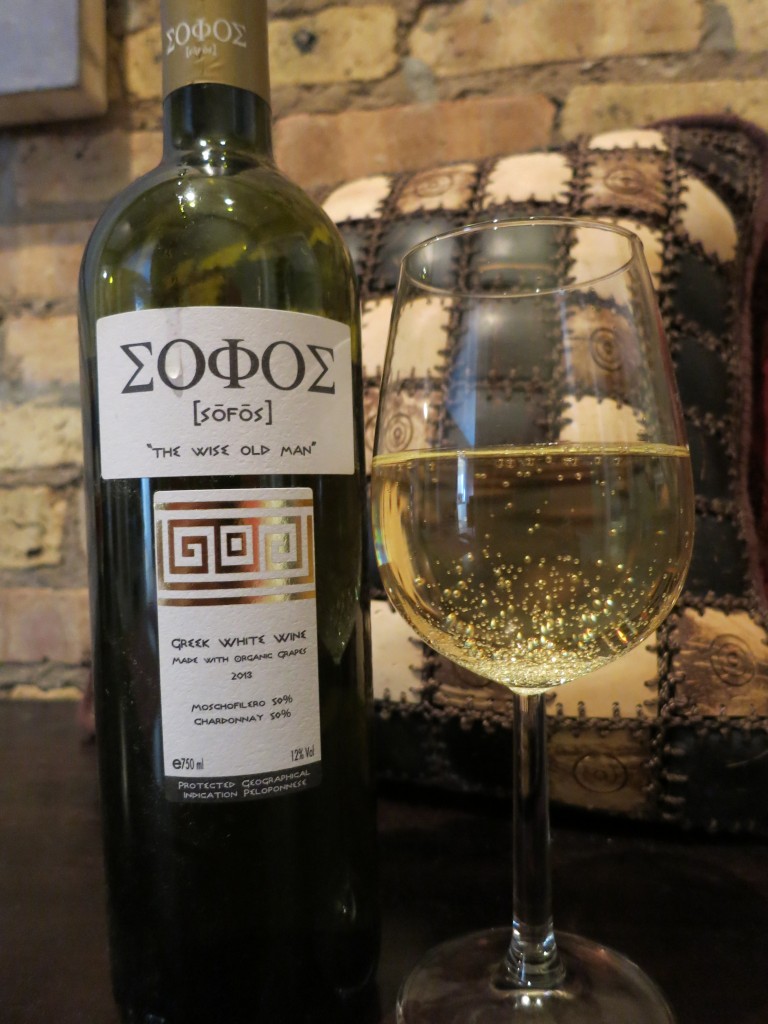 The 2013 Sofos White was even more of a surprise. Perhaps because this blend of 50% Moschofilero and 50% Chardonnay lacks stabilizing agents of any kind, my sample continued to ferment in the bottle, and by the time I opened it, it had become all but a sparkling wine. I asked the sales representative whether this sparkle was normal. She checked with the winery, which replied,

The pétillance [light sparkle] is due to the freshness of the wine. The white Sofos comes from the 2013 vintage that was bottled early, in October 2013. Thus there is a small percentage of bottles that could have appear pétillance in the border. The slight existence of CO2 -pétillance- in a fresh wine is something natural that unfortunately we cannot avoid it in 100%.

In my bottle it was no mere pétillance — the bubbles were clearly evident in the glass, not just on the tongue. But this was not necessarily a bad thing — Chardonnay, of course, serves as the base of many top Champagnes, and I also recently tasted a delicious sparkling Moschofilero, one of my favorite Greek white varieties (you can read more about Moschofilero here).

The Sofos white had aromas of ripe apples, tropical fruit and tart lime, but it tasted quite dry, with floral overtones and a lemony finish. The bubbles felt tight and fizzy, helping the wine cut through the richness of some barley risotto with asparagus, peas, mushrooms and Parmesan. And the risotto enhanced the wine as well, making it feel rounder and deeper. Another excellent value for $12 a bottle.

I’ve said it before, I’ll say it now, and doubtless I’ll say it again: There’s something exciting happening in Greece. Many people still regard Greece as a second-rate wine producer — read about the reaction of a Binny’s Beverage Depot sales clerk here — but those days are in the past. These Sofos wines provide yet more evidence that Greece is making delicious, fascinating and food-friendly wines. Most, like Sofos, are priced very affordably. Greek wine hasn’t been this good since the days of Pericles, and it’s only getting better.

9 January 2014
Comments Off on Arcadian Moschofilero 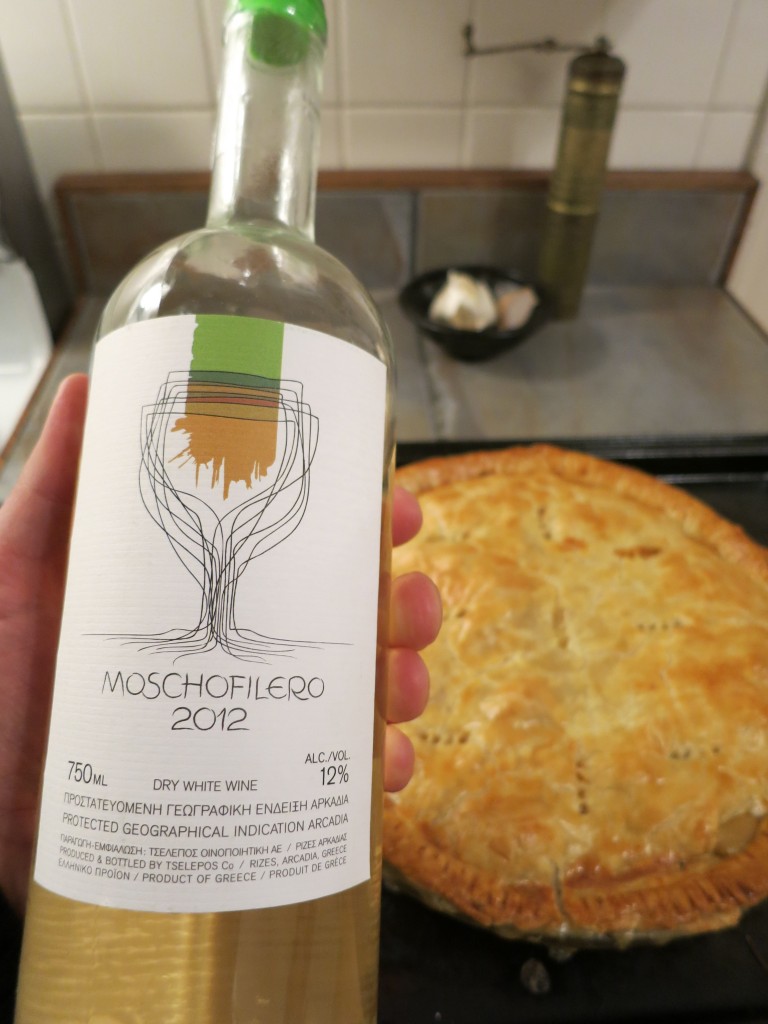 I’ve written before about Greek Moschofilero (also spelled Moscophilero), a white wine which I’ve found both exceedingly charming and slightly off-putting. The origins of this pink-skinned grape variety are “as yet obscure,” according to The Oxford Companion to Wine, and goodness knows I love a mysterious grape variety. Moschofilero also happens to usually taste rather floral and fruity, which made it ideal to pour with the season premier of Downton Abbey. Not so much because of the show, but because one of our guests preferred sweeter whites, and because I thought it would pair well with the chicken pot pie in the oven.

Why open a Moschofilero instead of a Riesling or a Gewürztraminer? For shock value, of course, and because you tend to get a lot of bang for your buck. The 2012 Tselepos Moschofilero cost me just $10 at Binny’s, and really, you’ll be hard pressed to find a well-balanced Riesling at that price.

According to the label, this particular Moschofilero is a “Protected Geographical Indication Arcadia,” which basically means the fruit for the wine could come from anywhere in that central Peloponnese province. Arcadia doesn’t qualify as an appellation, however. That distinction belongs to Mantinia, a high-altitude plateau in Arcadia, which produces wines that can command higher prices (see the Tselepos Mantinia, which costs about $5 more at Binny’s than the Tselepos Arcadia).

Beyond that, the wine is a bit of a mystery. The minimalist importer’s website shines little light upon it, and the Tselepos website doesn’t list the Arcadian Moschofilero among its bottlings. But in any case, at $10, this Moschofilero isn’t much of a risk.

A pale, pinkish yellow, this wine had a heady, sweet aroma of ripe apples, jasmine and incense. It tasted drier than I thought it would, with a bit of a prickly texture, flavors of apples and flowers, and some exotic spice underneath. The fruit was a bit flabby, to be sure, but the wine pulled together some with the pot pie. I wished it had more of a backbone, but hey, for $10, it’s quite an interesting and flavorful wine.

Would I buy it again? I would probably go for the more expensive Mantinia version if I could find it, or if I did want to only spend $10, I would buy the Kyklos Moschofilero instead. 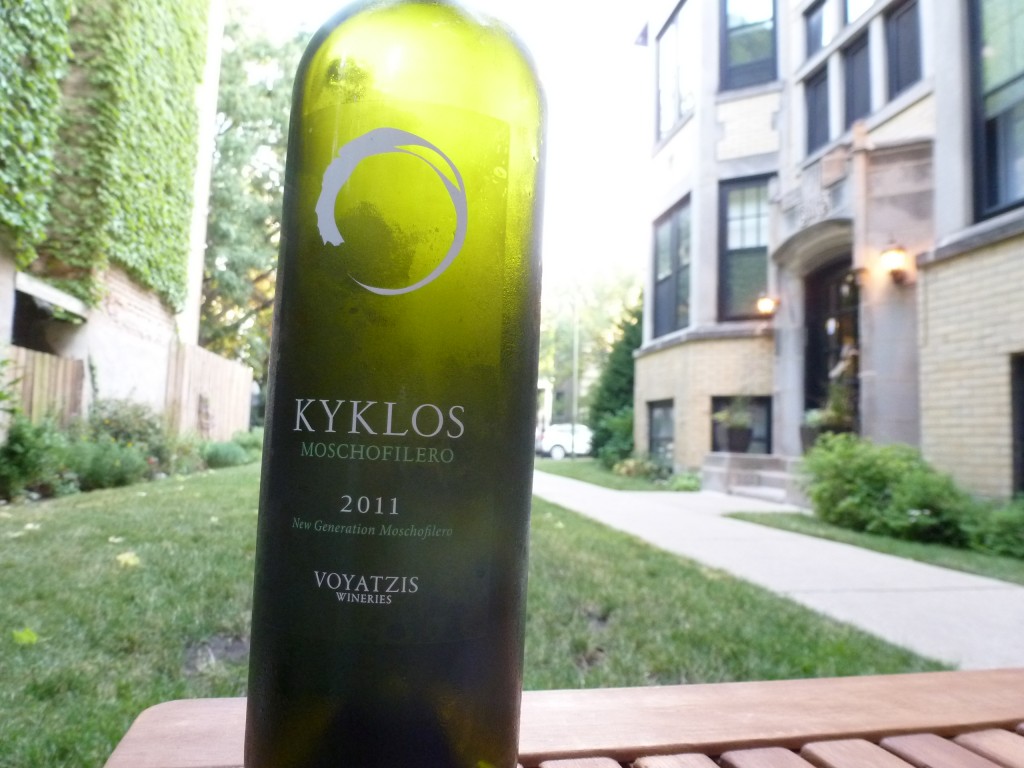 END_OF_DOCUMENT_TOKEN_TO_BE_REPLACED

10 August 2011
Comments Off on An Arcadian Oddity

Greece, according to The Sotheby’s Wine Encyclopedia, boasted a sophisticated wine industry long before the Gauls or Goths grew a single grape. And yet today, barbarian Bordeaux is celebrated the world over, while Greece’s wines are generally regarded as crap, not to put too a fine point on it, representing just 2% of Greece’s GDP (Sotheby’s).

Retsina bears no small share of responsibility for this fact. This pine resin-infused white was formerly popular in American Greek restaurants (The Oxford Companion to Wine calls it “a potent catalyst of taverna nostalgia”), but many people agree with Sotheby’s assessment that it’s little better than “pine cleaner.”

Resinated and oxidized wines continue to be popular with Greece’s older generations, but numerous winemakers have once again started to realize Greece’s potential to make international-style wines. I wrote briefly about a deeply satisfying Alpha Estate “Axia” recently, for example, and the ur-wine blog Vinography recently featured a fascinating article about the wines of Santorini. It’s easier and easier to find delicious Greek wine.

And the names! Who couldn’t love the wonderfully unpronounceable indigenous varieties of Greece? Xinomavro, Assyrtiko, Moschofilero… But my very favorite has to be the glorious Aghiorghitiko, which even Sotheby’s can’t manage to spell consistently.

Since I was cooking up a Greek-ish dish of ground lamb with zucchini, peppers, summer squash, cabbage, brown rice, garlic and dill, I decided to chill a bottle of 2009 Domaine Spiropoulos Mantinia. The Mantinia appellation requires that wines be at least 85% Moschofilero, a pink-skinned white varietal. (You may also see this grape spelled as Moschophilero or Moscophilero.)

At first I found the quote at the top of the label a little lofty. But in this case, “Et in Arcadia ego,” or “I too was in Arcadia,” is no symbolic allusion to an innocent pastoral past — this wine bottle literally came from the Greek province of Arcadia.

I poured a glass and was delighted by the golden color, betraying just a bit of pink in its hue. The Oxford Companion notes that this variety makes “strongly perfumed white wine,” and indeed it does. The bouquet overwhelmed me at first. It smelled heady and haunting, and — I couldn’t quite decide — like oregano or burnt rubber. (The label makes a case for “bergamot aromas.”)

The oregano/rubber flavor continued on the palate, supplemented by lemony acids. I would have to try another bottle to be certain, but I fear this bottle may have been flawed. Unwelcome compounds known as mercaptans (or thiols) can sometimes produce burnt rubber aromas, and it would seem odd indeed that a winemaker would purposely shoot for a rubbery wine.

I wish my Moschophilero/Moscophilero/Moschofilero experiment had been more successful — I had very much looked forward to trumpeting a new discovery. I’m afraid there’s just one thing to do: Drink another bottle of Moschofilero. Or maybe two, just to be sure.

Find It: Binny’s Beverage Depot has a reasonable selection of Greek wine (I purchased this bottle there for $13). Ask one of their wine consultants for guidance, avoiding “Michael,” of course.