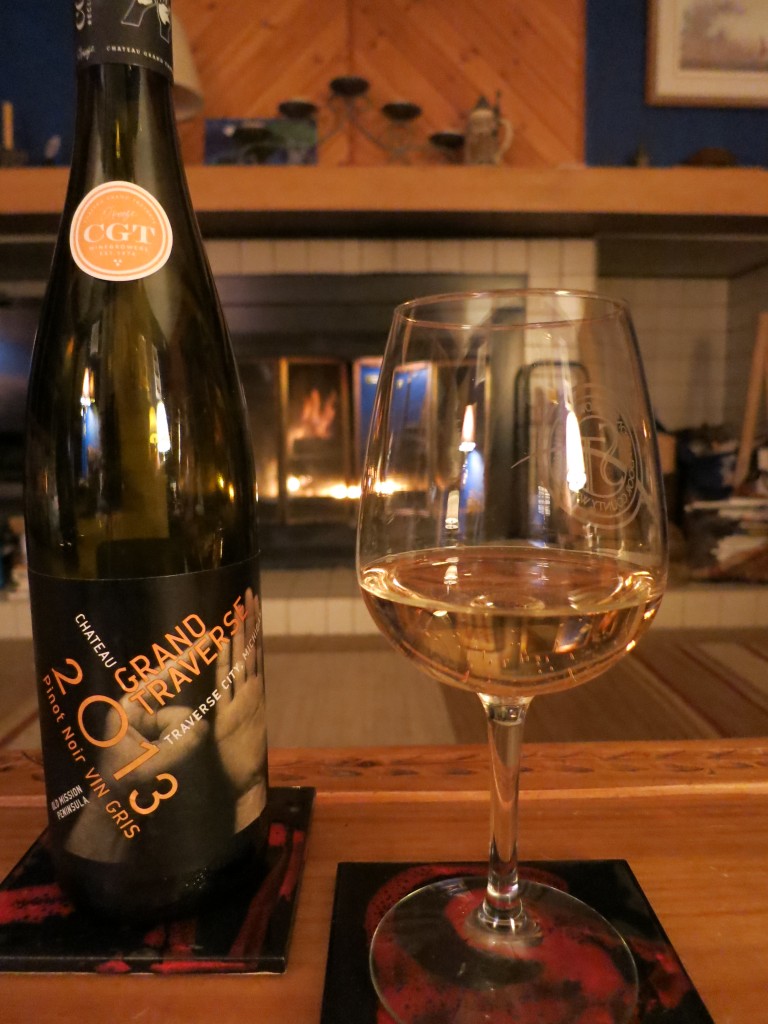 With the exception of sparkling Blanc de Noirs, I’ve always thought of Pinot Noir varietal wines as, very simply put, red. One does not tend to go to the white wine aisle in search of a Pinot Noir. But white Pinot Noir does indeed exist, as I discovered on a recent visit to my favorite neighborhood wine shop, In Fine Spirits.

There stood a bottle on the shelf, white as could be, but clearly labeled “Pinot Noir Vin Gris.” What was this stuff? Vin gris, which translates literally as “grey wine,” is wine made from dark-skinned grapes but without any skin contact after pressing. The pulp of most red grapes tends to be much lighter in color than the skins, which means if little or no skin contact is allowed during fermentation, the resulting wine will be white, pinkish or orange — not red. According to The Oxford Companion to Wine, vin gris is a specialty of the Côtes de Toul in Lorraine, some wineries in the Loire and a number of producers in the Midi near the salt flats of the Camargue.

The Oxford Companion does not mention vin gris as a specialty of Michigan, however. Indeed, one could be forgiven for wondering if any good wine of any kind comes out of the northern Midwest. But the lakes surrounding this state mitigate the climate enough to allow for the growing of wine grapes, and The World Atlas of Wine calls the vinifera vineyards of Michigan “promising.” That distinction, though, is important — many of Michigan’s vineyards are planted with American grape varieties or hybrids.

Chateau Grand Traverse, the producer of my bottle of Pinot Noir vin gris, has never planted anything other than vinifera grapes in its vineyards on the Old Mission Peninsula, the finger of land extending north from Traverse City. In fact, as The Sotheby’s Wine Encyclopedia relates, the owner of Chateau Grand Traverse was the first to attempt growing vinifera varieties in the area starting in 1974:

Ed O’Keefe of Chateau Grand Traverse… is the only person in the entire Michigan wine industry who has been 100 percent committed to vinifera from the very start. His constant arguing of his case did not make him many friends among his fellow winegrowers, particularly those of the old school who were clinging on to their hybrids, but he was right, and in the end he did everyone in the Michigan wine industry a big favor.

I’ve had other Chateau Grand Traverse wines before, and I found its dry wines to be quite tasty. But why attempt to market a vin gris of Pinot Noir? Surely that can’t be the easiest wine to sell. On the chateau’s website, the winemaker explains: “Vin Gris is the outcome of a pet project of exploring a white(ish) wine from Pinot Noir grapes. Since 2001, I’ve been looking at the differences between reds and whites, in a quest to merge the two.”

I felt very interested to find out the results of this quest, and recently opened my bottle of 2013 Chateau Grand Traverse Pinot Noir Vin Gris to pair with some risotto I’d made. A beautiful rose-gold color, the wine had a fresh, green aroma marked by some dried herbs. There was some pétillance (spritz) to the mouthfeel, and when it first came out of the fridge, the wine felt very bright and tight, with tart, appley fruit, prickly acids and a dry finish. As the wine warmed slightly, it developed a riper, rounder mouthfeel, and lovely undertones of berries. The acids of the wine cut right through the richness of the risotto, making for a fine pairing.

If you can’t make it over to In Fine Spirits, the Chateau Grand Traverse website sells the Pinot Noir Vin Gris for $14 a bottle. For such an unusual and food-friendly wine, that seems like a bargain to me.