More Reasons To Drink In Colombia

In case you weren’t convinced by my Colombian postcards #1, #2 or #3, here are a few more memorable drinks I had during my two-week journey. Especially after waking up to yet more snow in Chicago today, it didn’t take looking at many of these to make me want to hop on a plane and head right back. 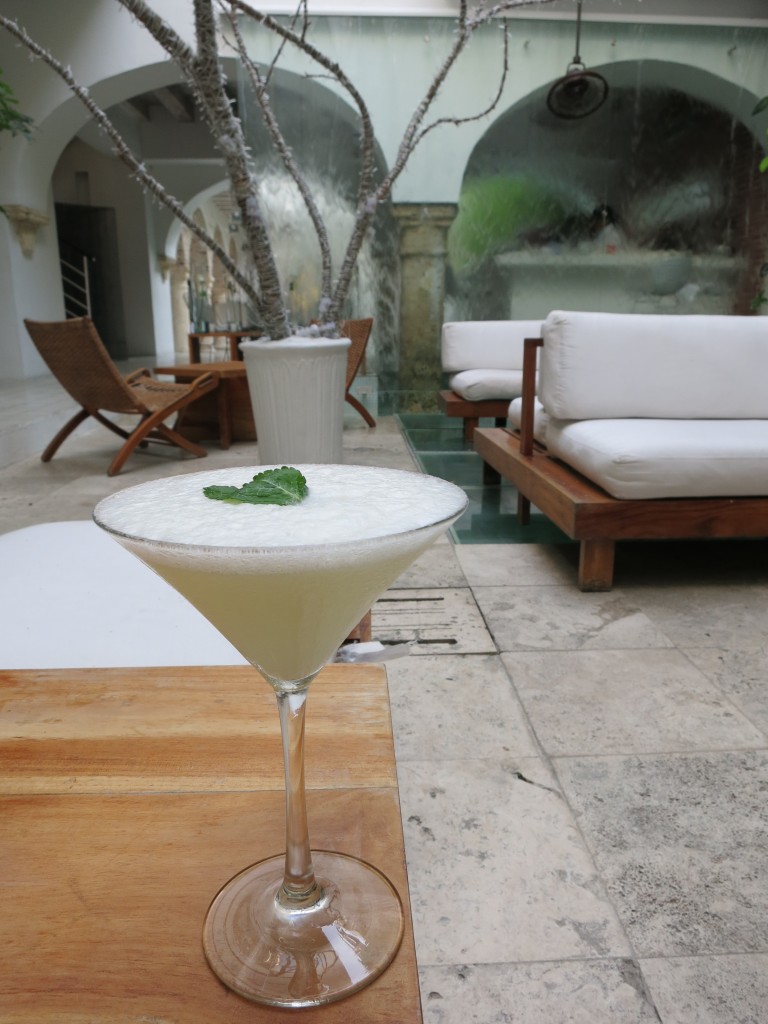 The Tcherassi hotel’s Aquabar made this deliciously balanced martini from gin, aguardiente (a local anise-flavored spirit) and “lemon foam.” 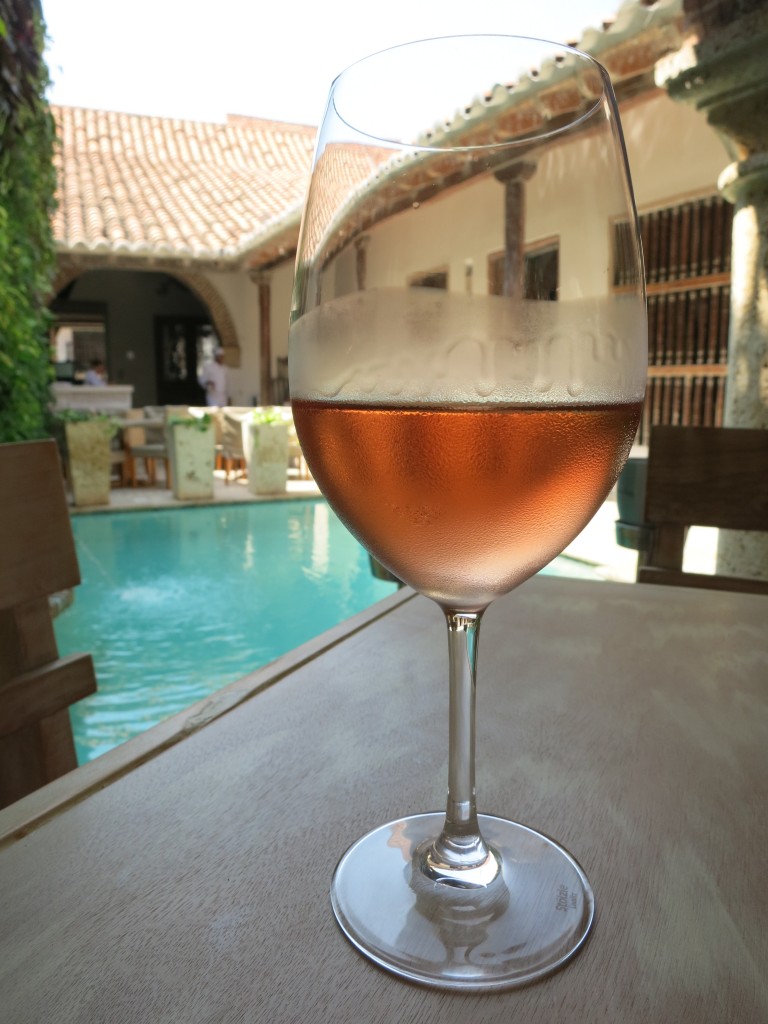 This refreshingly dry Cabernet Sauvignon rosé with creamy strawberry fruit and a chalky finish comes from Chilean winery Cousiño Macul, owned by the same family since its founding in 1856. It was heaven with lunch on the breezy patio of Cuzco restaurant in Cartagena. 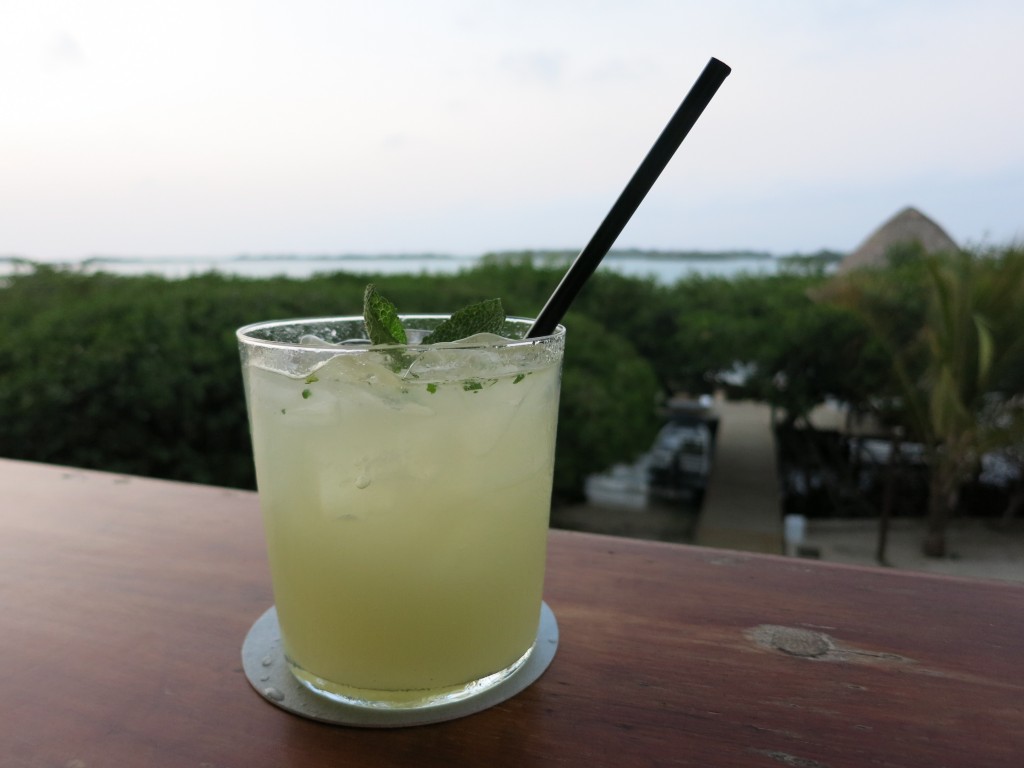 Aside from its unforgettable Islas de Rosarios setting, this mojito may not look especially unusual. But it tasted lusciously balanced and just a little naughty, since it was made with Havana Club rum from Cuba. 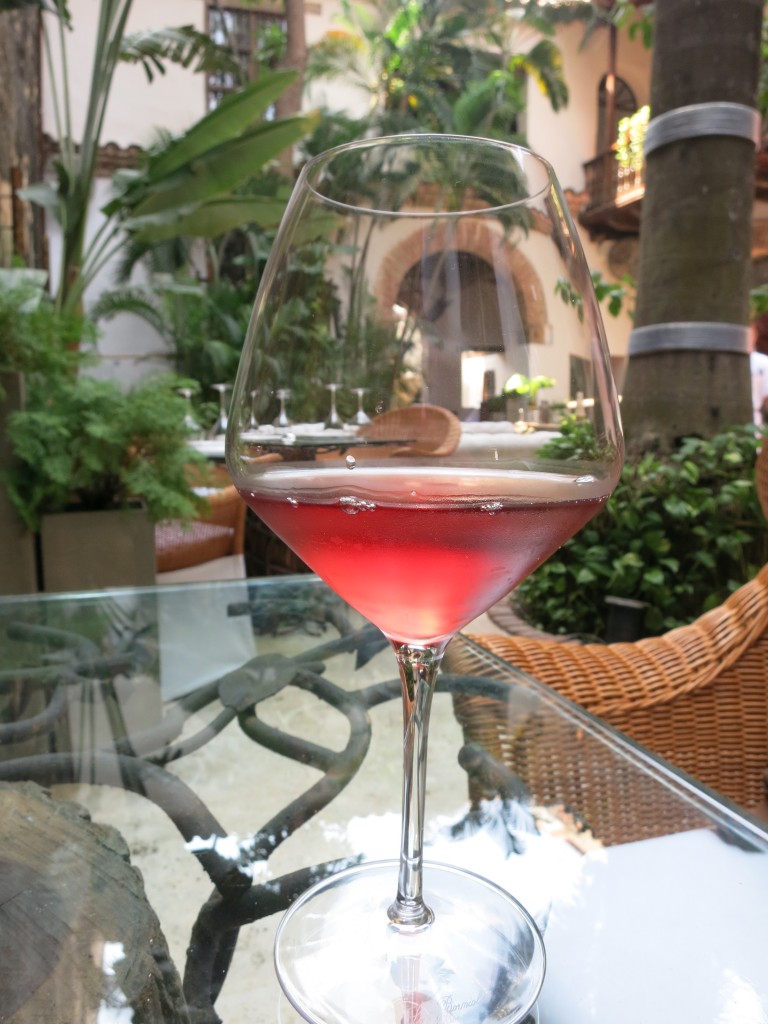 Rosé is just irresistable in Cartagena’s courtyard restaurants, like Bohemia pictured above. This ripely fruit rosé of Malbec was made by Chakana, a 12-year-old winery in Mendoza, Argentina. It had a bracingly chalky quality and sharp, orangey acids. Delicious. 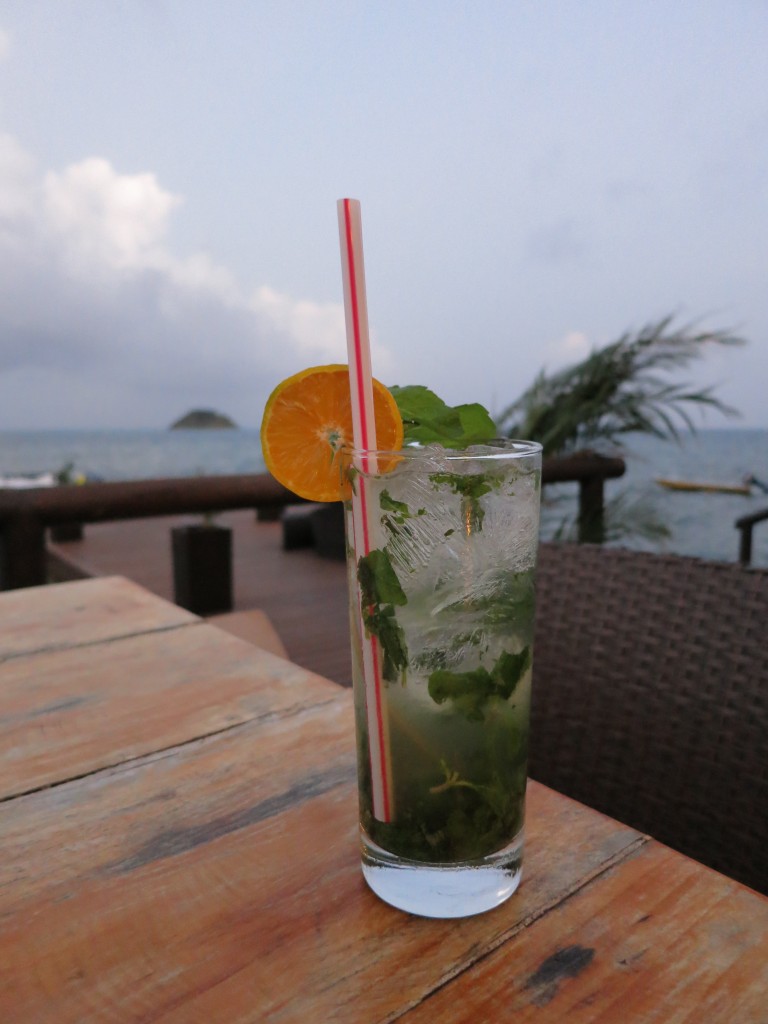 There are two unusual things about this mojito, sipped at Deep Blue on the gloriously unspoiled Caribbean island of Providencia. First, what appears to be an orange wheel garnishing the glass is actually a lime, and second, no lime juice actually made it into the cocktail. Whoops! 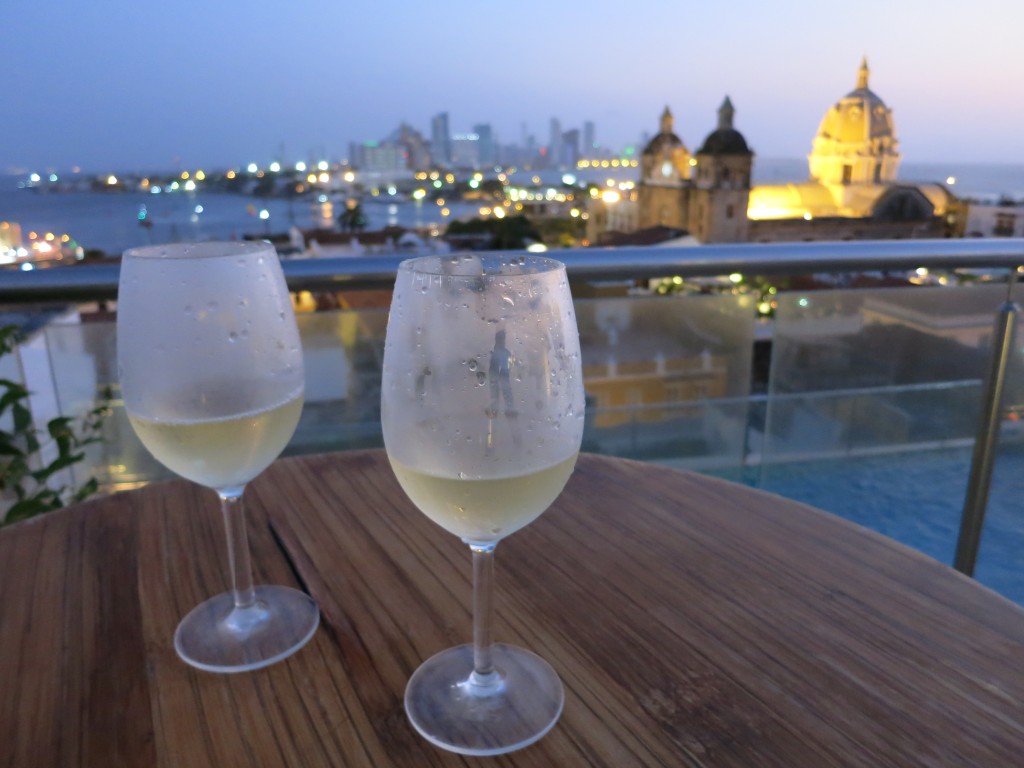 There was nothing unusual about this well-crafted New Zealand Sauvignon Blanc, enjoyed on the rooftop of the Movich Hotel in Cartagena. But with that view, it was hard to care.

21 February 2014
Comments Off on Postcard From Colombia #3 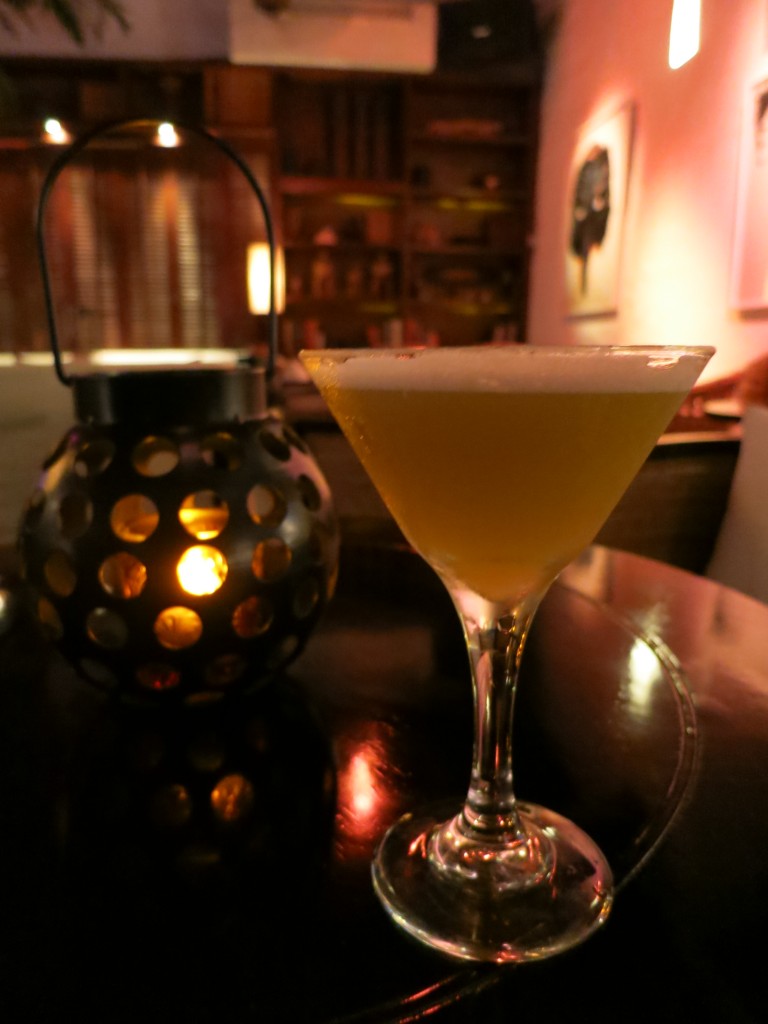 Colombia is not best known for its corozo-based cocktails, but its aguardiente. This clear spirit distilled from sugarcane has a delightful anise flavor, and it resembles a less cloying and less alcoholic ouzo, with a smooth spiciness. I quite like it neat. Look for aguardiente without added sugar.

Aguardiente makes a fine cocktail base, especially in the sure hands of the bartenders at El Coro in the Sofitel Santa Clara. Although the cocktail menu there is extensive, I wanted to try something specifically Colombian. The energetic bartender Jhon had just the thing: a Lulo Martini.

He mixed fresh lulo juice, which tastes rather like lemon and orange juice mixed together, with aguardiente and a touch of simple syrup. He shook up the concoction, used a straw to taste for balance (the bartenders checked just about every cocktail for balance), and presented the cocktail to me in a chilled martini glass.

It did indeed exhibit excellent balance, with a smooth, juicy texture. The anise overtones from the aguardiente were kept well in check by the creamy citrus of the lulo and sugar.

Hmm… I wonder how much trouble I would get in if I tried to smuggle a suitcase full of fresh lulos home with me?

18 February 2014
Comments Off on Postcard From Colombia #2 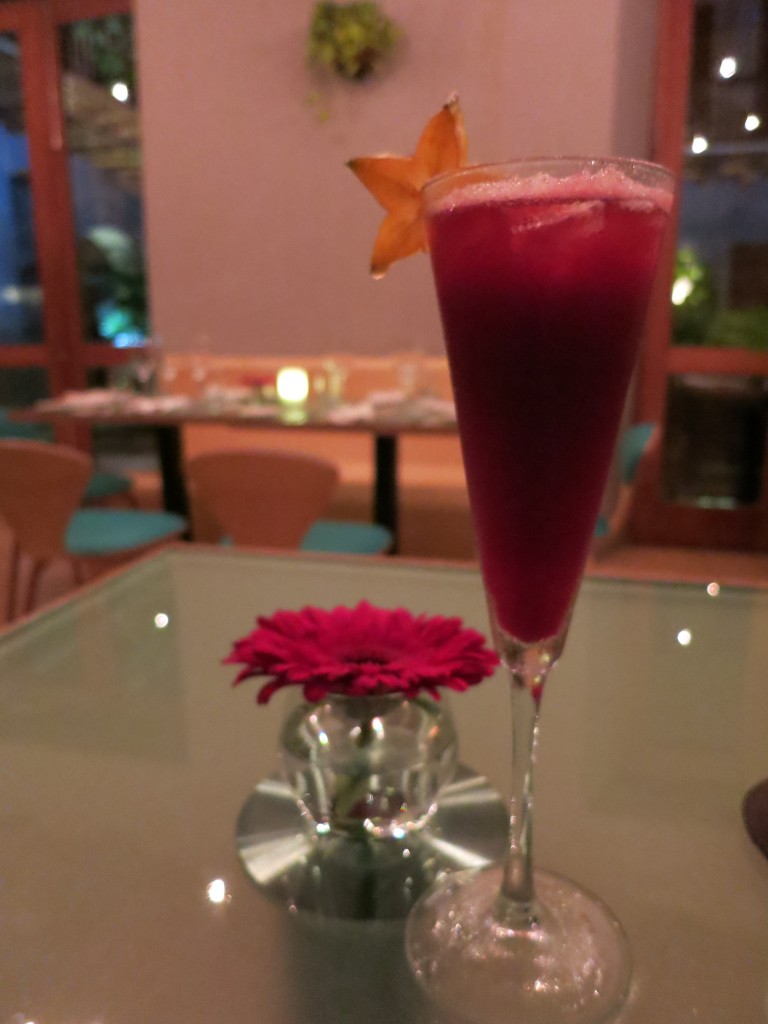 Ah ha! I knew it could be done — a truly delectable drink made from the Colombian corozo fruit. As I described in this post, corozo has a tart flavor somewhere in between a blackberry and a cranberry, which would seem to make it ideal for cocktails.

I tried a Corozo 75 in Cartagena at the estimable Carmen Restaurant in the Hotel Anandá, and what a revelation. This cocktail, composed of corozo-infused gin, corozo syrup and Chandon Rosé sparkling wine, tasted remarkably round and rich, in marked contrast to my previous experience with a corozo-based cocktail. The berry fruit felt deep, and yet the cocktail maintained an excellent balance, with lightness of texture from the Chandon and a floral note on top.

If you can get your hands on some corozo, this is the cocktail to make.

Or better yet (and perhaps easier), come to Cartagena’s Carmen Restaurant. The cocktail and the meal alone are almost worth the trip.

In Search Of Equatorial Wine

6 February 2014
Comments Off on In Search Of Equatorial Wine

In preparation for my upcoming trip south, I consulted my trusty World Atlas of Wine, which contains precisely zero information about Colombia. The Sotheby’s Wine Encyclopedia was scarcely better, mentioning the country just once, in a table, noting that it has approximately 1,500 hectares (about 3,700 acres) dedicated to vineyards, in contrast to Argentina’s vast 207,985 hectares.

None of this was a great shock — Colombia, after all, won’t win a Ms. Fancy Wine South America pageant. Of my research tomes, only the ever-comprehensive Oxford Companion to Wine offered any prose about the country. Only in the 1990s, it says, did Colombia start producing wine from vinifera grapes in any measurable amounts. Production, such as it is, centers in the country’s southeast, away from the tourist centers of Cartagena and Bogotá.

I was most interested to read that vines must be annually de-leafed by hand, a project which temperate-climate winemakers would doubtless find baffling. Why strip the leaves of perfectly healthy grape vines? Defoliating the plants forces them into a state of dormancy normally induced by winter a season which seldom comes to these equatorial vineyards. No dormancy, no fruit.

I hope to find one or two examples of Colombian wines to try out, otherwise I suppose I’ll be relegated to the local aguardiente. But I hear of a restaurant on the island of Providencia that makes its own tamarind wine, and after being beaten down by this relentless cold and snow, the idea of sipping some tamarind wine by the sea is all that’s keeping me from huddling under my down comforter until spring.