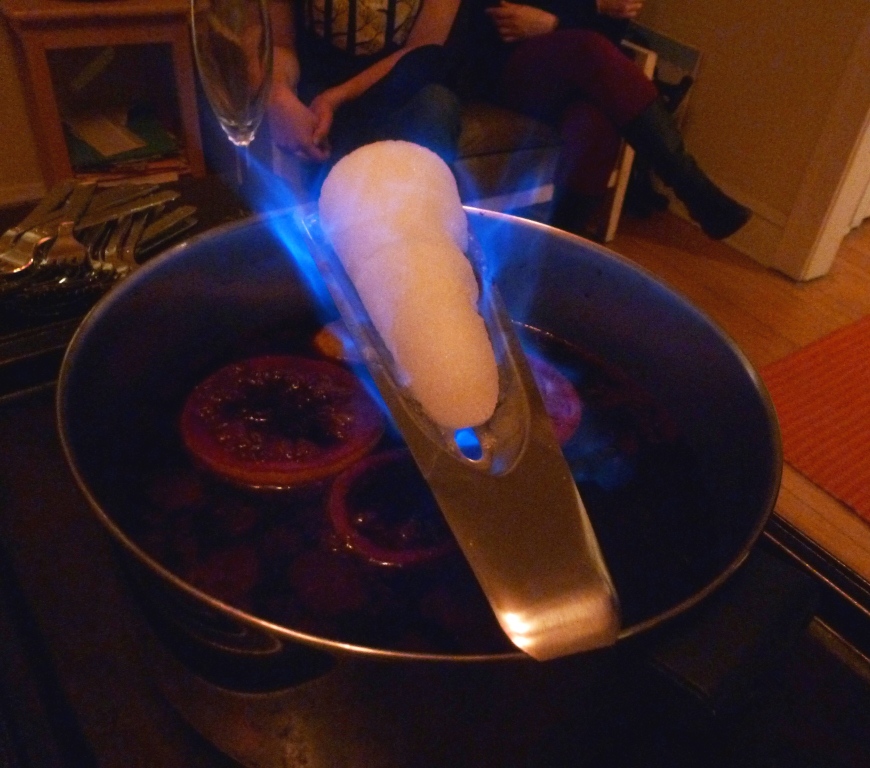 Germany has some of the loveliest Christmas and New Year’s Eve traditions anywhere in the world. But one of my favorites has yet to catch on in this country, perhaps because of its daunting name: Feuerzangenbowle (literally “fire tong punch”). Pronounced “FOY-yer-tsahng-en-bowl-eh,” this drink brings serious Gemütlichkeit to any gathering.

First, and most important, be sure your fire extinguisher has been recently recharged and is within easy reach. Feuerzangenbowle, like most great party drinks, involves an element of risk.

To make this delicious and heady punch, you set a cone of rum-soaked sugar aflame over some mulled wine. It melts into the wine, sweetening and strengthening it. Since you’re adding a fair amount of sugar into the punch, it’s best to use a very dry red wine. This year I used a 2010 Venta Morales Tempranillo, because that’s what I had lying around, but I usually opt for an inexpensive Bordeaux.

It’s also important to use a rum of the appropriate strength. A Rhum Agricole with around 53% alcohol, like Chauffe-Cœur from the island of Martinique, works quite well and flambées relatively easily (purchased for $27 at Andersonville Wine & Spirits, tel. 773-769-0858). Do not — and I can’t stress this enough — do not use Bacardi 151. The first time I attempted to prepare Feuerzangenbowle without the aid of German friends, I made this mistake. The flames almost reached the ceiling, dazzling my guests, horrifying my roommate and singeing my eyebrows.

Now, if you’re prepared to embark on the adventure that is Feuerzangenbowle, here is your shopping list:

4 or 5 Sticks of cinnamon

Start by juicing the oranges and lemons, reserving the peels. Stud two halves of a juiced orange with cloves and place them in a large stainless-steel or ceramic-clad pot (avoid non-stick in this case). Add in the two halves of the lemon and the orange/lemon juice. Do not use store-bought orange or lemon juice — it’s important to use fresh juice and peels. (The classic recipe calls only for peels, but I enjoy the additional texture and tartness the fresh juice provides.)

Add in the cinnamon sticks and pour in the wine. Slowly heat the mixture to just below a simmer — do not let it boil. Be sure the orange halves are clove-side down, so that all the cloves are in contact with the wine. You could just toss the cloves in, rather than sticking them in the peels, but then it’s much easier for them to end up in someone’s mug.

Once the wine is heated, I like to place four pot holders on the table and set an old cookie sheet on top. With the Feuerzangenbowle pot on the cookie sheet, it’s less likely flaming rum will end up on your table.

Set a Feuerzange (sugar tray) onto the pot, and lay the Zuckerhut (sugar cone) in the tray. These two items can be difficult to find. If you live near a German deli or specialty shop, they will likely carry sugar cones this time of year. If not, you can order them online from GermanDeli.com.

Even if you can find a sugar cone, you will also need a Feuerzange in which to lay the cone over your pot of wine. These specialized metal trays can be even more difficult to find, unfortunately. GermanDeli.com sells them here, or you can try GermanGrocery.com.

Should you fail to obtain a Zuckerhut and a Feuerzange, do not despair. Instead, purchase a box of sugar cubes and a sturdy metal sieve you don’t mind throwing away (be sure the sieve has a tab opposite the handle, so that you can lay it across a pot). Place the sugar cubes in the sieve and lay it across the Feuerzangenbowle pot.

Pour some rum over the sugar. If you have a sugar cone, turn it over so that you soak both sides. Gather your party guests, and light the sugar cone on fire. It helps to have a lighter with a long neck, so that your hands are as far from the flames as possible. The flames will last a little while, but it’s necessary to spoon additional rum over the sugar cone from time to time to keep it burning and melting. Again, a spoon with a long handle is best, so that you’re not too close to the flame. 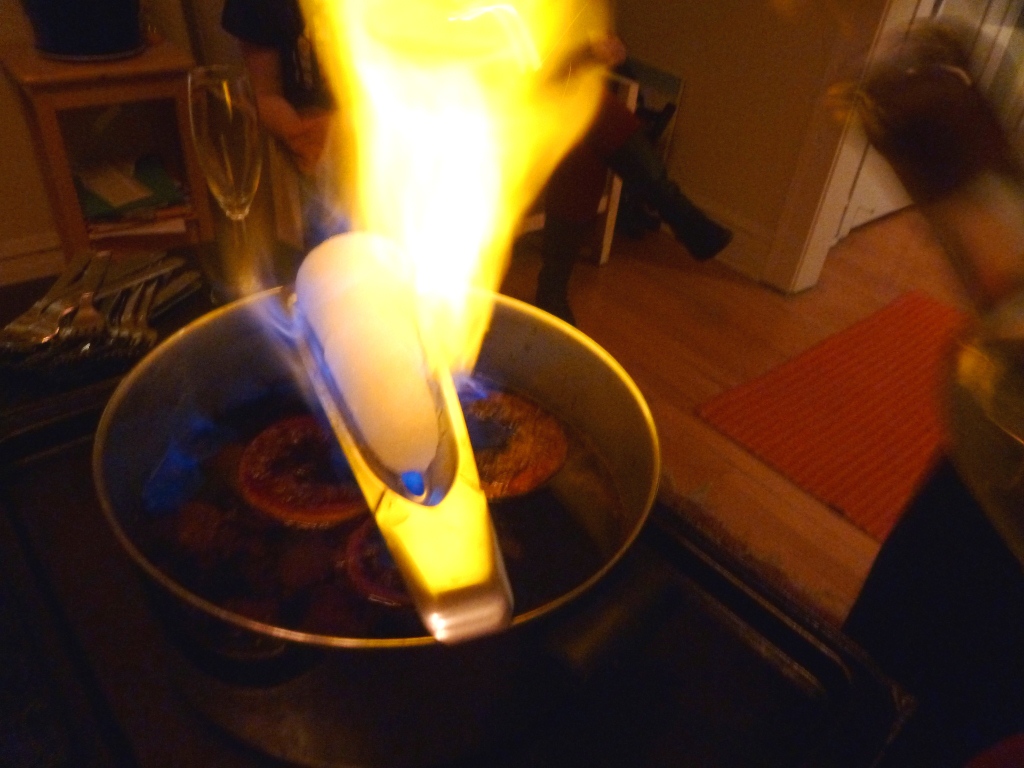 Do not attempt, in fear, to toss spoonfuls of rum onto the burning sugar. The flames will only be larger (see right), and rum flung from a spoon has a much greater chance of landing on your table, still aflame. It’s best to carefully move a rum-filled spoon over the sugar, ignite the rum while it’s still in the spoon, and slowly pour it over the sugar.

If your sugar cone goes out before it’s fully melted, spoon some more rum over the cone and reignite it with the lighter.

Once the sugar has completely melted into the wine, remove the Feuerzange or sieve, give the punch a stir and ladle into small mugs. A final warning: Feuerzangenbowle is potent stuff — it’s easy to become quickly intoxicated.

12 Comments to “An Unpronounceable Holiday Tradition”

Some Odd Resolutions A State Of The Vineyards Report
Subscribe RSS