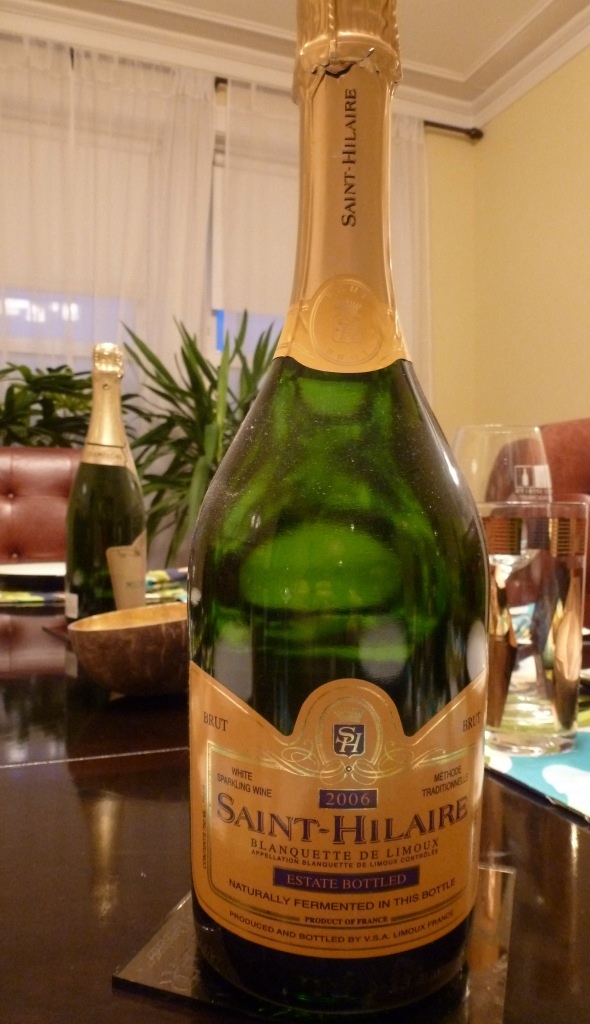 And what on earth is Mauzac? This white grape grows on only about 4,000 acres in Limoux and Gaillac, a wine region northeast of Toulouse. The Oxford Companion to Wine alerts us that late-ripening Mauzac tends to be harvested much earlier now than in the past, “preserving its naturally high acidity but sacrificing much of its particular flavour reminiscent of the skin of shrivelled apples…”

Our experience with the 2006 Saint-Hilaire Blanquette de Limoux would not cause me to disagree. Indeed, it lacked a bouquet of any kind, and it certainly didn’t taste of apples. The wine was very dry, with pleasantly small bubbles and a clean, simple, crisp flavor. Because it also had ample acids, it paired quite well the coconut milk/potato/carrot stew we made.

I wish I could say this inexpensive sparkling wine could compete with its younger sibling, Champagne, but this is definitely a case of beauty before age.

2006 Saint-Hilaire Blanquette de Limoux: Clean and crisp, with small bubbles and food-friendly acids. A simple sparkler, but not a bad value.

Find It: Binny’s sells the 2007 vintage for $12. The Extra Dry and Demi-Sec versions are worth trying if you enjoy sweeter bubblies.