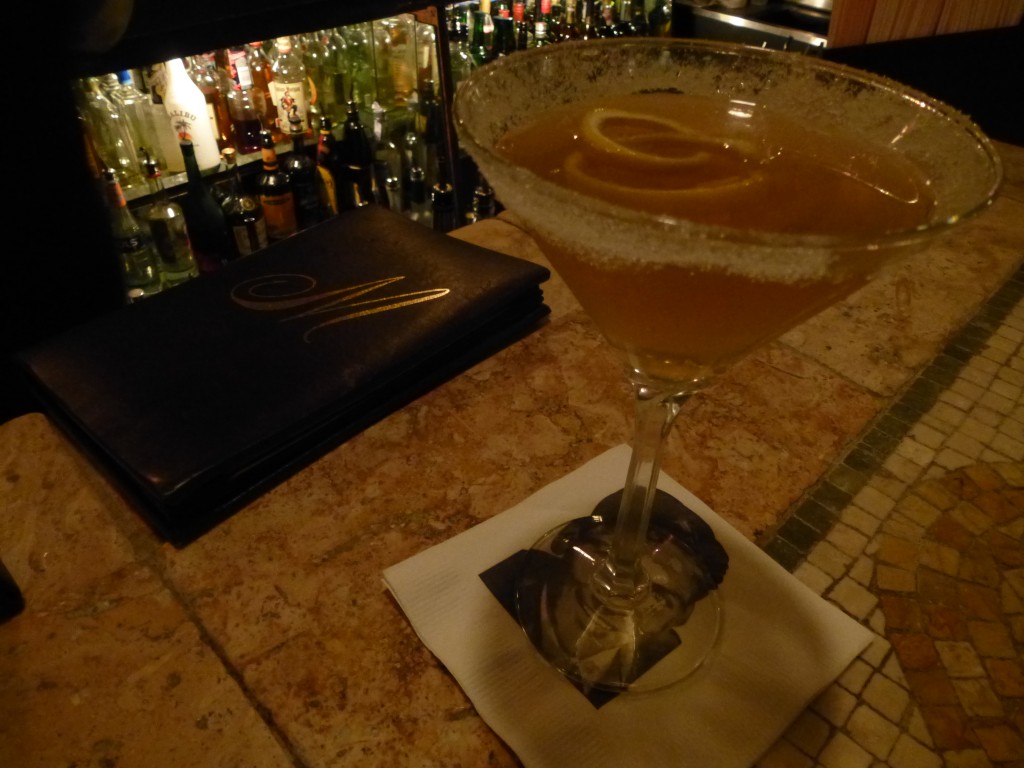 Let’s take a breather from Temecula for a moment and talk about Melvyn’s, a “legendary” Palm Springs bar and restaurant which used to be popular with celebrity types, most notably Frank Sinatra. According to its website, a poll by a local newspaper ranked Melvyn’s as having the “#1 Best Martini” in the city. In the mood for a good cocktail and a little old-school Palm Springs glamor, I stopped in for a drink.

The atmosphere was pleasant enough, with live piano music and a well-dressed crowd munching on steaks. I pulled up a bar stool and ordered one of my favorite classic cocktails: A Sidecar. The bartender got to work.

A waitress nearby overheard my order and asked the bartender what goes into the drink. He replied, “It’s brandy, triple sec and sour mix, and you pour that into a glass with a sugared rim. It’s basically like a margarita but with brandy instead of tequila.”

The waitress inquired, with appropriate skepticism, “Is that good?” Then she looked at me, and noticing the look of confused horror on my face, she added, “Because I don’t think he likes the sound of that.”

Indeed I did not. “Yes, I was a little surprised to hear your recipe,” I admitted. “I usually use Cognac, triple sec and fresh lemon juice.” (As described toward the end of this post).

“Well, this is how we make it here,” the bartender replied. “Why don’t you give it a try and see if you like it.”

Though I usually draw the line at artificially flavored sour mix, I’m not one to shy away from an unusual interpretation of a drink. I agreed to give this Brandy Margarita/Sidecar concoction a try.

I gingerly took a sip, and it didn’t taste awful. It was rather light, not especially strong and not especially flavorful. I suppose if one had never tasted a real Sidecar, one might think this drink was innocuous enough, if a little boring, and one would probably never order it again.

If one has tasted a real Sidecar, and one most certainly has, this sad cocktail would seem a poor imitation at best. A Sidecar should be bright and citrusy with a round, darkly sweet underbelly. With dead flavors and a watery texture, this drink failed to achieve any of the sprightliness or complexity of the properly made cocktail. Even more upsetting, it contained sour mix, a noxiously green chemical stew with barely a natural ingredient to its name. Not only does the drink taste bad, it’s bad for you.

So congratulations, Melvyn’s. The year is still young, but so far, your Brandy Margarita — er, Sidecar — wins my award for Worst Cocktail of 2013.

To experience the joys of a real Sidecar yourself, add two parts Cognac, one part Triple Sec (or Cointreau if you’re feeling extravagant) and one part fresh-squeezed lemon juice to a shaker with ice. To get the proportions right, squeeze your lemon juice first and use that as the measure of a part. Then shake and strain into a martini glass. Easy! It’s traditional to sugar the rim of the glass, but I’m lazy and I skip that step.

And heck, since blood oranges are appearing in grocery stores now, you might give this Bloody Sidecar recipe a try as well!

2 Comments to “A Terribly Unusual Sidecar”