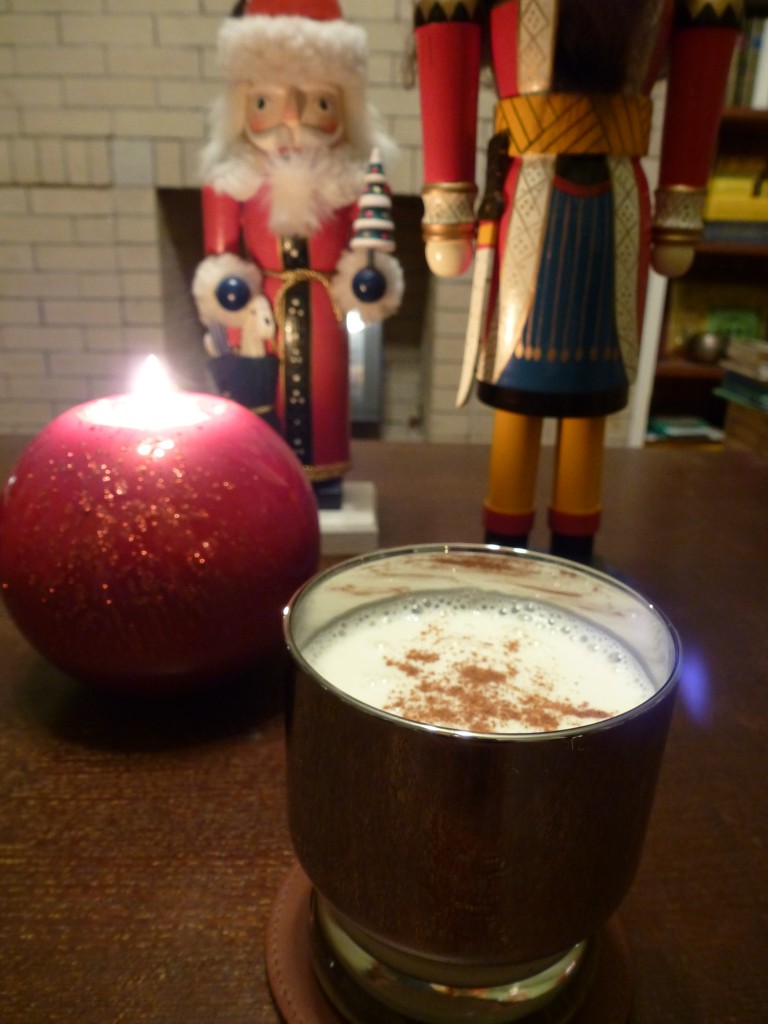 In all probability, eggnog with a little brandy was the first cocktail I ever tried. I was, after all, only 10 or 11 when my dad first presented me with this nectar, just before we opened gifts at Grandpa’s house on Christmas morning.

I still indulge in gloriously fatty, sugary eggnog each year, adding a touch to my morning coffee, or spicing it up with a splash of Cognac in the evening, should I be feeling extravagant.

But is this really the best way to enjoy eggnog? Could my eggnog pleasure be yet further increased? The possibility seemed remote, and yet too enticing to ignore. I got to work.

First, it’s important to choose the right eggnog. For my money, the most sumptuously thick comes from Oberweis, a local dairy. Should Oberweis be unavailable, choose an organic eggnog, made with real yolks and spices, rather than processed fat and artificial flavors.

A good eggnog can stand up well to a variety of different spirits, which means you can use whatever your favorite booze may be, and the drink will still turn out basically all right.

Whichever booze you choose, proportions are key. A 1:1 eggnog/booze ratio yields a perfectly delightful and very adult cocktail, but when I drink eggnog, I want the full fatty luxuriousness to envelop my palate. For me, a 2:1 ratio of eggnog to booze afforded a balanced drink that remained lusciously thick in texture.

If you have particularly thick eggnog, the booze likely won’t incorporate immediately. I recommend stirring, either in a pitcher or in the glass, rather than shaking in a shaker. Shaking the eggnog aerates it, and I want that thick texture intact. And worse, if you use ice in the shaker, you’ll end up diluting the nog. Not acceptable. The eggnog should be cool enough that you don’t need to use any ice. If it’s important to you that the drink be truly cold, put the booze in the freezer for 30 or 40 minutes before you plan on drinking.

I tried mixing eggnog with a variety of different spirits, and while none of these combinations proved to be offensive, some worked better than others. I used a 2:1 ratio in all cases, unless otherwise noted:

With Brandy: A classic combination. With no basic brandy on hand, I used Remy Martin VSOP Cognac, and it worked predictably well. But this was not my favorite combo. The vanilla and caramel flavors in the Cognac were too close to the flavors in the eggnog, making the cocktail a little one-note.

With Tequila: Unorthodox but successful. I used El Jimador Reposado tequila, and the result had a surprisingly dry finish, even with just a hint of smoke. I rather liked it even better than with the Cognac!

With Rum: Another classic combo, except that I used a Rhum Agricole clocking in at a touch over 100 proof. The bright, sharp finish might be a bit strong for some, or just right for others. It gave me an idea. Why not try eggnog…

With Bacardi 151: I keep this rum, with its unholy 75.5% alcohol content, on hand mostly because it’s so easy to ignite. In this case, it proves exceedingly useful because you can add half the amount and get the same alcoholic kick. With a 4:1 eggnog/Barcardi 151 ratio, you have an eggnog cocktail with unparalleled thickness of texture.

With Coffee Liqueur: Since I do enjoy a little eggnog in my coffee, I assumed a little coffee liqueur in my eggnog would taste just as good. I was wrong. It tasted simple, caramelly and way too sweet. It was dessert, not a cocktail. I couldn’t drink more than two sips. If you’re determined to go this route, make it more of a White Russian, using 1 part coffee liqueur, 2 parts vodka and 5 or 6 parts eggnog.

With Bourbon: My favorite combo of all. Again, I seemed to be out of inexpensive bourbon — all I had was some delicious Rowan’s Creek. I used it in this cocktail only reluctantly, assuming its flavors would be completely lost, as the Cognac’s flavors were. But what a delight! After the initial wave of eggnog flavor, I detected something herbaceous underneath. Then as the eggnog faded away, the bourbon really came to the fore, making for a wonderfully delicious finish. A memorable journey, and one I suspect I’ll be repeating many times between now and Christmas. It’s worth trying with whatever bourbon you may have on hand.

I also spent some time working up a more complicated cocktail, because after all, I wouldn’t be Odd Bacchus if I didn’t want to complicate matters just a little. I wanted to complement the nutmeg and cinnamon in the nog, and I hit on the idea of using orange and ginger, two similarly warm flavors. After noodling around with the proportions, I came up with a marvelous concoction I like to call:

–1 part Ginger Liqueur (A number are on the market, but Stirrings’ is much less expensive than most others)

Pour all the ingredients, ending with the eggnog, in your glass or a pitcher. Stir to combine, and serve in a lowball or rocks glass. Do not use ice at any point in the process. The eggnog, orange, ginger and bourbon all have their moment on your palate, making for a delicious and surprisingly complex journey.

It’s traditional to top your eggnog with some freshly grated nutmeg, but that’s a pain, and there’s already plenty of nutmeg in most store-bought eggnogs. I prefer a little cinnamon powder on top of my nog. If you want to get fancy, top your eggnog with a touch of cinnamon and a sprinkle of ginger powder. Even fancier, top with a bit of ginger powder and garnish with a whole cinnamon stick.