Who knew I would have so much to say about Temecula? Don’t be fooled by the “Part 2” in the title. This is actually my fourth post about this unsung wine region north of San Diego, and I saved some of the best for last. Well, almost last. On the advice of the charming and startlingly young sommelier at the Ponte Vineyard Inn (geez, kids are learning about wine early these days!), I visited two of Temecula’s smaller wineries, Palumbo and Doffo. The intimate tasting rooms provided exactly the sort of wine-tasting atmosphere I like most: Casual, friendly and focused on the wine.

Should you find yourself in Temecula at some point, don’t miss these guys. First, Palumbo: 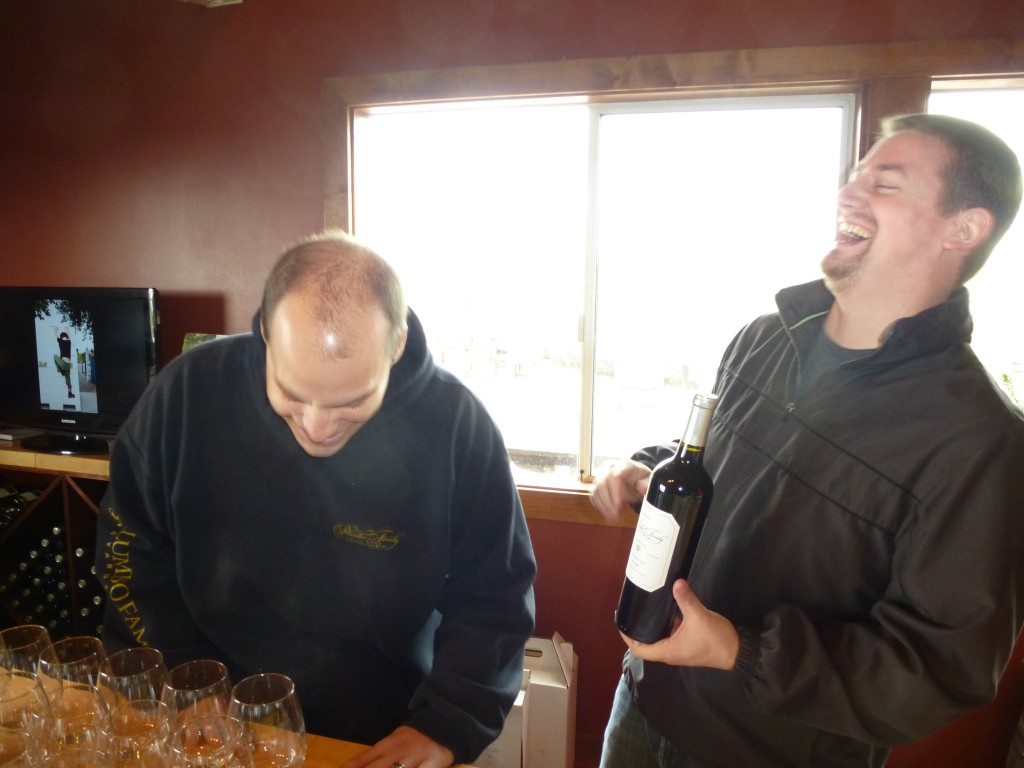 On a quiet side road away from the big wineries along Rancho California, this winery was recommended by almost every Temeculan I spoke with. All the fruit for its wines comes from Palumbo’s 13 acres of vineyards, because owner Nicholas Palumbo “believes in producing only what he grows himself,” according to the winery website. And good for him. I don’t know much about viticulture, but it makes sense to me that if you’re not controlling what happens in the vineyard, you’re not controlling what happens in the bottle.

Here are some of the excellent and very focused wines I tasted in the congenial Palumbo tasting room:

2011 Viognier: Fresh, tropical nose. Focused, surprisingly tight fruit followed by tart acids and some exotic spice on the finish. Viogniers can get a little overblown sometimes, but Palumbo kept a tight corset on this one!

2009 Syrah Clone 877: You know it’s serious when clone numbers start appearing. This wine had a meaty, earthy aroma, and again, it showed impressive focus and restraint. A supple mouthfeel gives way to zingy spice, some tannins and a bit of tobacco. Marlene Dietrich with a cigarette.

2009 Shiraz/Cabernet “60/40”: If you hadn’t guessed, this is a blend of 60% Shiraz and 40% Cabernet Sauvignon. It had a soft and jammy nose, rich but tightly wound red fruit, something herbaceous in the middle and a bit of spice at the end.

2008 Cabernet Franc “Catfish Vineyard”: Made from grapes grown on 21-year-old vines, this wine had aromas of iron and earth. It tasted earthy and tight, with focused red fruit flavors, a bit of sweetness, medium tannins, and a finish reminiscent of the aroma.

2009 Tre Fratelli “Meritage”: This Bordeaux-style blend had a marvelously rich and fruity aroma, with some violets in there as well. Woo! A very elegant wine, with impressive focus and non-trivial finesse. Ample fruit was tempered by silky tannins and some acids. Fine balance.

2009 Sangiovese “Due Figli Vineyard”: Brick red, with an earthy, jammy nose that had me itching to give this wine a taste. I was not disappointed. It tasted wonderfully lush, with jammy fruit, a luxurious mouthfeel and a tannic finish. Way to end the tasting with a bang!

Up Next: Tasting amid the motorcycles at Doffo.