Home » Regions » New York, Riesling » Bobbing On The Surface Of The Finger Lakes

Bobbing On The Surface Of The Finger Lakes 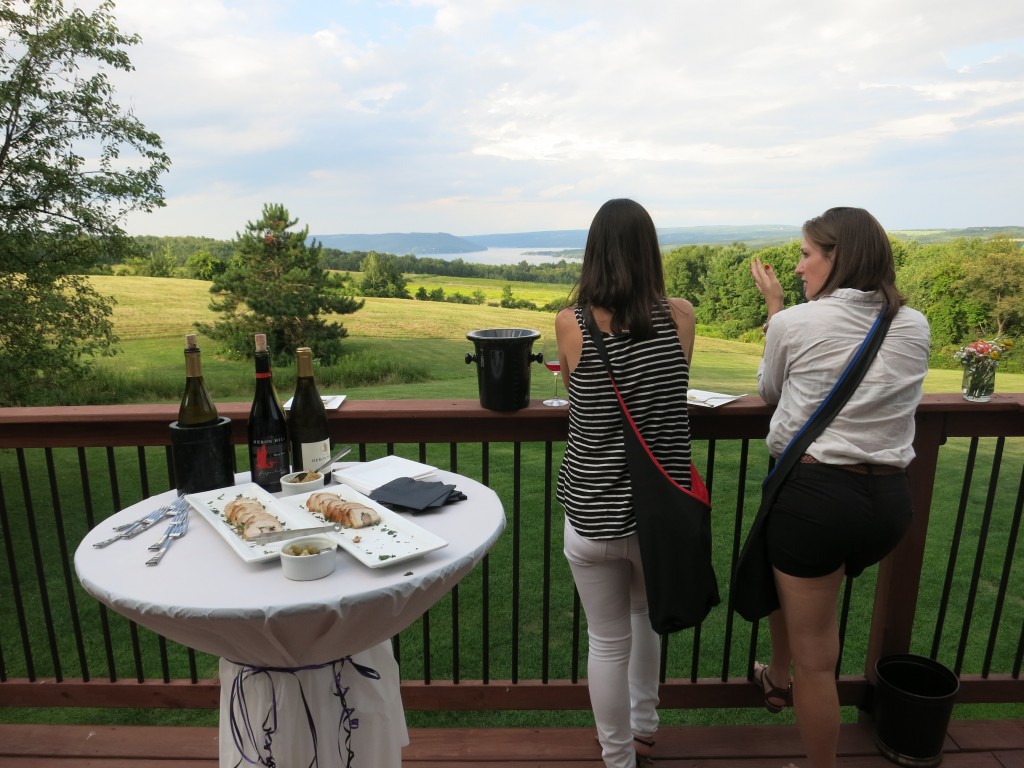 The terrace of the Manor House overlooking Keuka Lake

As I departed this year’s Finger Lakes-focused Wine Bloggers Conference, I felt something strange. A lack. This subtle absence might have even gone unnoticed, had I not participated in previous conferences in Virginia and British Columbia. After those two conferences, I felt a strong connection to the wine regions. I can still viscerally feel the rolling vineyards of Virginia, planted along roads where Thomas Jefferson rode in his carriage, and the sweeping vistas of British Columbia, where the vineyards melted into a vast landscape of rugged mountains and lakes. This time, as my plane departed the minuscule Elmira airport in rural New York, my viscera barely twitched. Something was wrong. 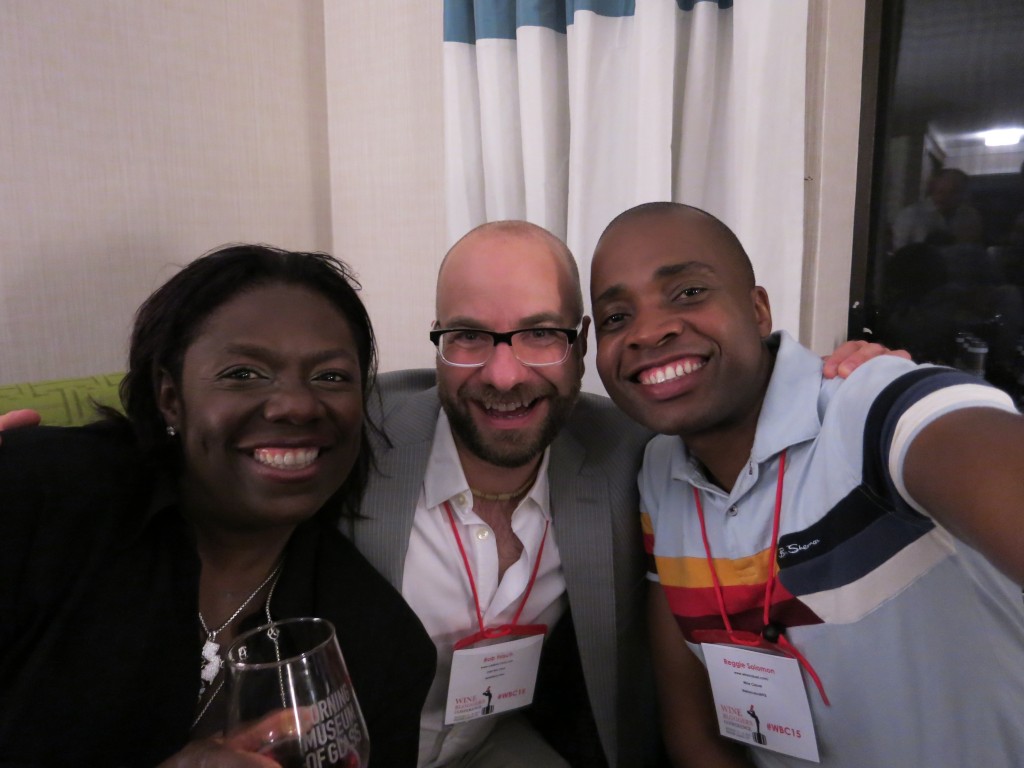 Glynis of Vino-Noire.com and Reggie of WineCasual.com with the author (center)

I went over the events of the conference in my mind — the tastings, the dinners, the receptions, the after-parties — all of which had been delightful. Nor could it have been the people. I deepened several friendships made at the British Columbia conference, and forged new ones as well. I left feeling more strongly connected to the wine blogger community than ever. And the winery representatives I’d met couldn’t have been more personable. One winemaker even invited me to stay at his house, should I return to the area! Then the problem became clear.

Somehow, over the course of my three nights at the Wine Bloggers Conference in Corning, I had managed to avoid visiting a single winery or vineyard. How was this possible?

I am as much to blame as anyone, since I didn’t make time for either the pre- or post-conference excursion to the Finger Lakes, both of which included multiple winery visits. The town of Corning itself, charming though it may be, with its quaint downtown and impressive museums of glass and American art, is bereft of vineyards. I knew this, and just assumed that an excursion to a winery or two would take place during the conference as had happened in the past.

We did hop on buses at one point to get into the countryside, but we didn’t know where a bus was going until we were already en route. My bus made a perfectly pleasant trip to the Manor House on Keuka Lake, where we tasted an array of delicious Rieslings. The word “exotic” keeps appearing in my notes about these Rieslings, which exhibited aromas like jasmine and incense and flavors of roses, ginger and fleshy peach. These were well-balanced and rather sexy wines, made by the likes of Ravines, Vineyard View, Barrington and McGregor. 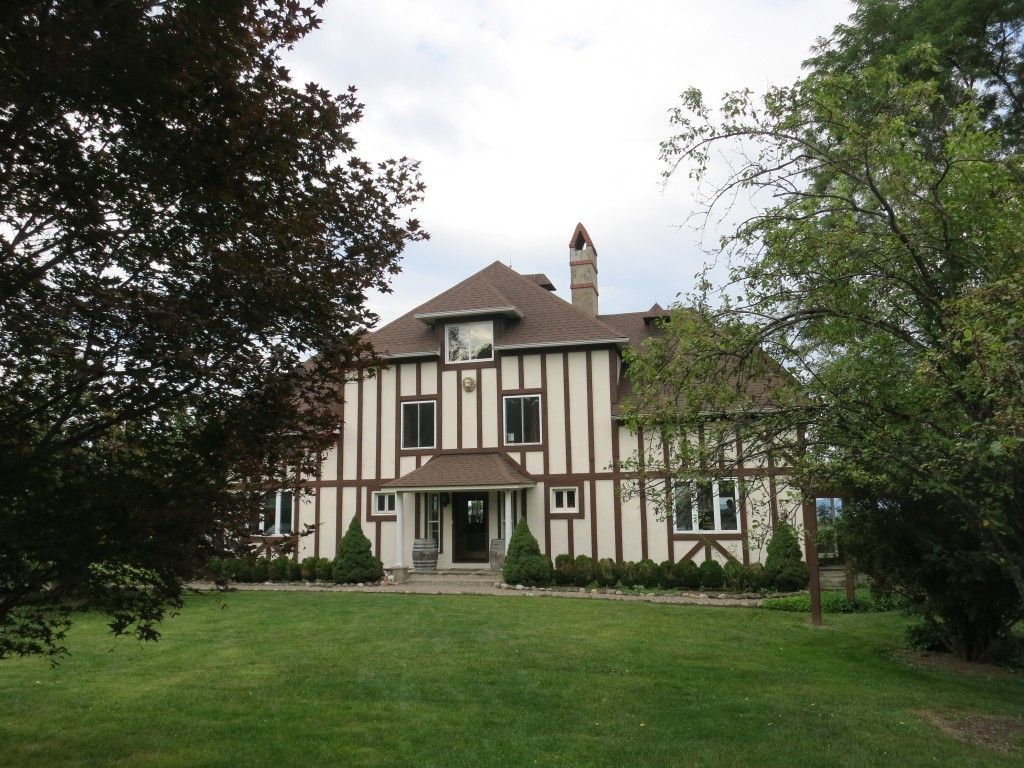 The Manor House near Keuka Lake

I loved this flavor journey along the Keuka Lake Wine Trail, but it was unfortunately unaccompanied by a physical journey to any wineries or vineyards. The Manor House made for a pretty event venue, with food stations set up inside the house stocked with fluffy gnocchi in Gorgonzola cream sauce and sweet-and-sour glazed pork meatballs which we nibbled on the lake-view terrace. But it could not substitute for a winery.

I’ve been fortunate enough to visit an array of wine regions over the years, and when I drink something from a place I know, the wine transports me there in the manner of Proust’s madeleine. When I drink Tokaji, I find myself back in that 500-year-old cellar caked with mold or on the vine-clad hillside near my hotel, staring aghast at the gash in the distance where the communist regime mined a Grand Cru vineyard for clay. When I drink a well-crafted wine from Mendoza, my skin remembers how the breeze felt as it swept down from the distant Andes and across the vineyards surrounding me. I can still physically feel these places in a way that I simply can’t the Finger Lakes.

This lack made something clear to me which, in retrospect, should have been obvious. I don’t feel like I know a wine until I’ve actually visited where it’s made. When you stand quietly for a little while in a vineyard, the terroir seeps into you, just a bit, just like it does the wine. Touching and smelling the casks in a cellar — it connects you to the wine, deepening your experience when you taste it. Tasting alone is not enough.

I’m still bobbing on the surface of the Finger Lakes. One day soon I’ll have to fix that.

2 Comments to “Bobbing On The Surface Of The Finger Lakes”