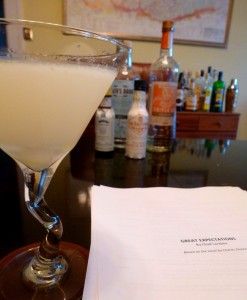 The Pegu Club (according to Eric Felten):

Pour all the ingredients into a cocktail shaker, and shake vigorously with ice. Strain into a martini glass (or even a small margarita glass), and garnish with a lime wedge, if you’re feeling fancy.

I was not feeling fancy, I feel bound to admit, and I used neither the lime wedge nor the orange curaçao. I had only lowly triple sec on hand. At least it was Stirring’s “all natural” triple sec, “infused with sun-ripened oranges” rather than spiked with orange-flavored chemicals.

I have made the drink properly in the past, and I’m sure the orange curaçao made for a finer cocktail. But this natural triple sec sufficed for a Wednesday night Pegu Club. One thing I would never compromise on, however, is fresh lime juice. Use Rose’s Lime Juice, bottled lime juice or sour mix at your peril.

Careful cocktail composers will be rewarded with a wonderfully refreshing and complex drink. The tartness of the lime, the aromatics of the gin, the roundness from the orange curaçao (or triple sec), the depth of flavor from the two kinds of bitters — it all combines into a drink that’s fun but undeniably adult.

No Comments to “The Pegu Club”

Click here to cancel reply.
Odd According to Bon Appetit The Abouriou Interview