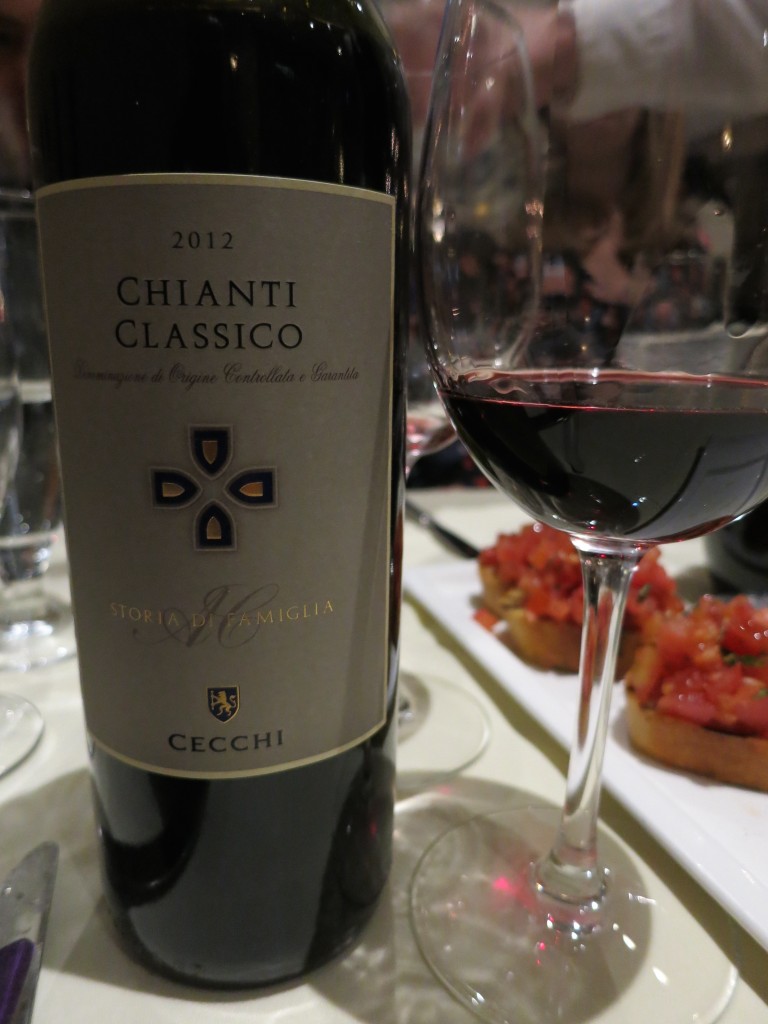 For many of us of a certain age, the word “Chianti” evokes fat bottles in straw baskets, bought not for the cheap wine inside so much as for the bottle, which made a great candle holder. Even today, that stereotype has yet to entirely disappear. Those in search of a great wine might pick up a Super Tuscan, perhaps, but I suspect fewer would look to a wine labeled Chianti Classico. Chianti may be Italy’s most famous wine region, but its name is not necessarily synonymous with fine wine.

The Italians have only themselves to blame for that, I’m afraid. In the 1960s, the government updated the DOC regulations for Chianti Classico, the traditional heart of Chianti and the source of most of the region’s best wines. The bureaucrats of the time decided that the best way to promote the economic health of Chianti Classico was to increase the quantity of wine produced and sold. Quality was of secondary concern. Whereas regulations previously allowed a certain percentage of the white Trebbiano and Malvasia grapes in the Sangiovese-based blend, now the rules required that the blend include 10 to 30 percent of the white grape juice. Fortunately, a number of growers decided to focus on quality instead, planting international varieties and selling what proved to be critically acclaimed (and expensive) wines as lowly Vino da Tavola.

The topsy-turvy situation was a bit of an embarrassment to regulators, of course, and finally in 1996, Chianti Classico became its own DOCG region as opposed to just a sub-region of Chianti. Yields were restricted, the required percentage of Sangiovese was increased, and the white-grape requirement was scrapped. But it wasn’t until 2006 — just ten years ago — that white grapes were banned from Chianti Classico, as the World Atlas of Wine explains. 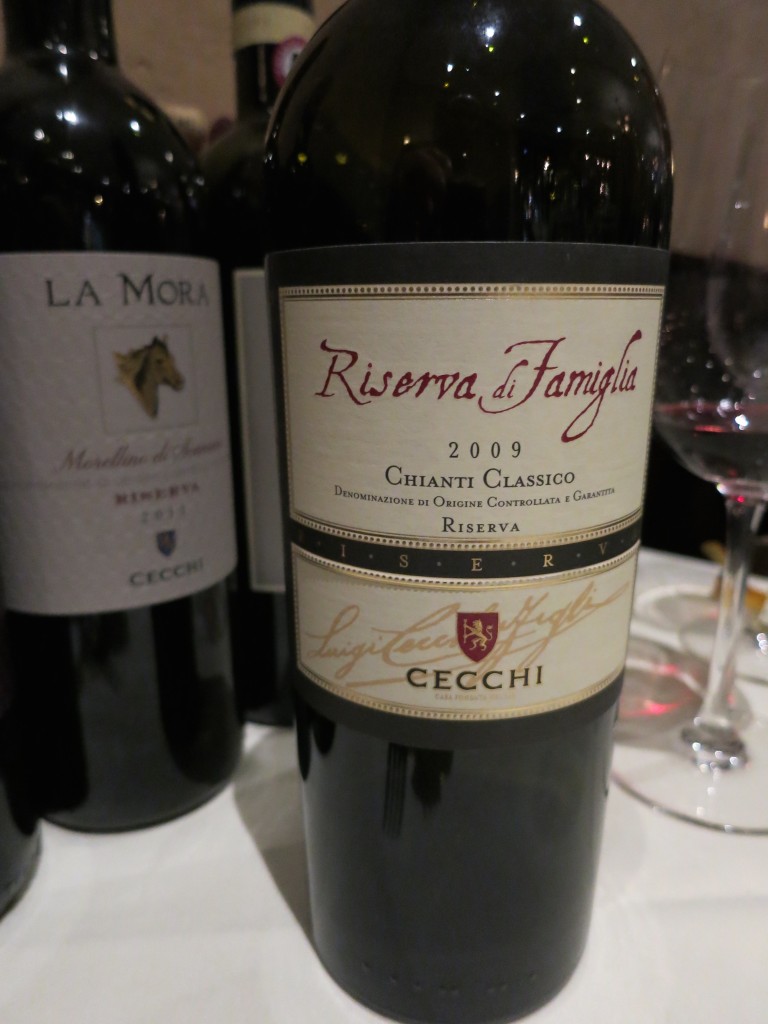 I relate all this at length because I suspect that many people remain unaware of the recent changes in Chianti Classico. The wines now coming out of this region merit serious attention, a point that was driven home to me at a recent tasting with winemaker Andrea Cecchi.

I had expected to write only about his wines from Maremma, a region with far less fame than Chianti Classico, and therefore more appropriate for this blog dedicated to the unusual (you can read that post here). But the Chianti Classicos Andrea poured proved so surprisingly delicious, I felt bound to write about them.

His Chianti Classico is his winery’s best-seller in the United States, and after trying it, I can see why. A blend of 90% Sangiovese with the remainder composed of the traditional Colorino and Canaiolo varieties, the 2012 Cecchi Chianti Classico ($21) had a bright and cheerful aroma of red fruit, notably strawberries and cherries, and a hint of star anise. The wine filled my mouth with dark-red fruit, but like the other Cecchi wines I’d already tried, this Chianti Classico had distinct dryness to it. Some light spice in the middle led to some supple tannins on the finish. This was no rough-and-tumble Chianti. The wine had real elegance.

Those who prefer their wine with some oak should instead consider the 2009 Cecchi Chianti Classico Riserva di Famiglia ($41), which is produced only in favorable vintages. This wine, composed of 90% Sangiovese and 10% Cabernet Sauvignon, sees 12 months of aging in barriques (small oak barrels). It smelled of fresh red fruit, but I also detected a raisin note in the aroma. The fruit felt really rich on my tongue, and thank goodness it did, because it had to balance the ample oak that followed. The tannins were wonderfully round, in spite of all that wood, and overall effect was quite refined. The oak notes made it an excellent pairing with some savory prosciutto, which also gave the fruit an extra shine. 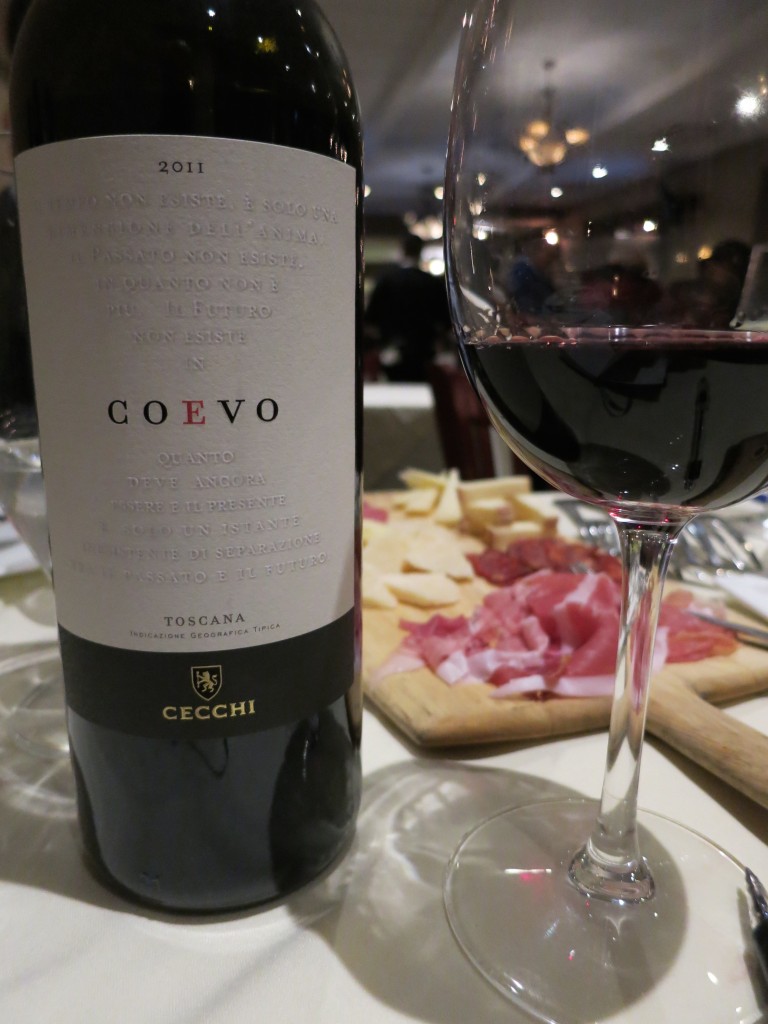 Last, Andrea poured the 2011 vintage of his Super Tuscan, a blend of 60% Sangiovese from Chianti and 20% Petit Verdot, 10% Cabernet Sauvignon and 10% Merlot from Maremma. The name, COEVO, which translates as “contemporary,” was chosen “because it conveys the value of time,” according to the tech sheet I received. I could tell from the aroma that this was a wine to be reckoned with. The deep, dark-fruit aroma had a striking freshness underneath, conveyed by a tobacco note.

I took a sip of the wine, and Andrea started saying something or other about it that was probably important, but I didn’t hear a word he said. It was just me and this absolutely gorgeous wine. The fruit was positively sumptuous — rich and round — and just enough spice perked up to keep it in balance. The wine moved seamlessly from one flavor to the next, culminating in the slow and steady development of exquisitely fine-grained tannins.

I can just picture it now, as I write this. What a shame I only had a small glass! I’ve never really considered spending $106 on a bottle of wine, but the 2011 COEVO might convince me to do just that.

One Comments to “Chianti Reconsidered”